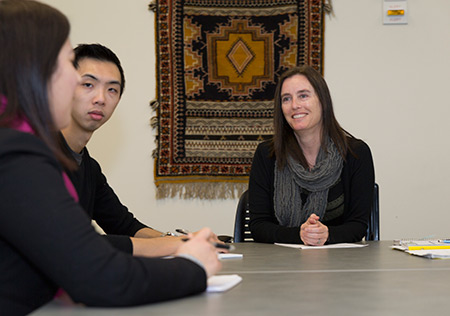 The depth and breadth of post-diagnosis care for cancer patients often depends on the resources available to them.

But a new paper in the journal PLoS One by UC Merced Professor Nancy Burke shows that care — and how effective it is — also depends on understanding and addressing cultural differences.

Burke and her colleagues gathered data about access to information and knowledge of treatment history from five ethnically and linguistically diverse focus groups of underserved breast-cancer patients through the San Francisco Women’s Cancer Network.

Their study found that although the Institute of Medicine in 2005 issued a recommendation for standard survivorship care plans, few care organizations have instituted them. The ones that have sometimes fail to account for cultural and socioeconomic differences that have huge implications for how well patients transition from diagnosis through specialist care and back to their primary care physicians.

Burke said the study demonstrates the need for information and education on the transition between active treatment and survivorship, greater health and well-being information and education, and the need for a process for survivorship care beyond just written instructions that can be technical and hard to understand, even for native English speakers.

“Culture, ethnicity and socioeconomic status introduce complexities into care,” Burke said. “When those considerations are left out of care plans, the people themselves are left out.”

As Burke and a colleague wrote in a commentary for the November issue of the journal Medical Anthropology, cancer is a global problem, but not a uniform one. Even the understanding of cancers varies across cultural groups.

For example, while U.S. oncology clinics discuss pre-cancer with breast clinic patients, in some countries with little or no cancer screening infrastructure, the only cancers recognized are the ones that are visible and at the point of necrosis. Oncology and cancer research also varies across nations. In South Korea, for example, cancer is not associated with poverty but with economic prosperity and increasing life spans, Burke wrote.

Such differences were observed across the five San Francisco focus groups, too.

For example, not all the women in the focus groups understood that they would transition from specialists and cancer clinics back to primary care. Some didn’t have primary care physicians. Many had questions about healthy lifestyles and choices for post-cancer care and some were unable to read or understand the written care plans they did have.

The women interviewed also had different understandings of “survivorship,” a concept taken for granted in U.S. cancer care. In the United States, cancer patients are often referred to as “battling,” and survivorship is seen as an individual struggle.

“Many of the women we interviewed didn’t understand or rejected the war metaphor based on their cultural background and life experiences,” Burke explained. The idea of fighting as an individual against an illness draws on a sense of self that doesn’t translate across cultural groups, especially for those in which the self is inherently connected to others. “There’s just a lot of uncertainty and a lack of information.”

Because most of the women in the focus groups were being treated in a safety-net public teaching hospital, communication about the transition between specialty and primary care was inconsistent.

Burke, a medical anthropologist with the School of Social Sciences, Humanities and Arts and an affiliate of the Health Sciences Research Institute, is working with the hospital’s medical oncologist on a follow-up pilot study to see what happens when patients have help through the transition.

The year-long study will divide patients into two groups: One that gets thorough written survivorship care plans in conversation with a provider, and the other, which gets the care plans and talks, with additional support from bilingual, bicultural “patient navigators” who will accompany them to primary care appointments and follow up over the phone.

“We want to measure the differences in quality of life and see how well people in both groups are able to adhere to the recommendations in their care plans,” Burke said. “We’ll be looking to see how well they understand their medical histories and situations, and how much cancer-worry they continue to carry.”

If the study shows patient navigation has a significant effect on life after cancer diagnosis, it will support the argument made in the PLoS paper: Written care plans, while a step in the right direction, fall short of what is needed for low-English-proficient and medically underserved cancer patients.

“If we really care about people and this program is shown to make a difference, we need to invest in these kinds of support services,” Burke said.

The University of California, Merced, is nearing the completion of an unprecedented campus expansion project and raising its reputation across the nation...

UC Merced Rises to No. 3 in Young University Rankings

UC Merced’s reputation as a world-class research university continues to grow, as the university rose to No. 3 among U.S. universities in the 2020...