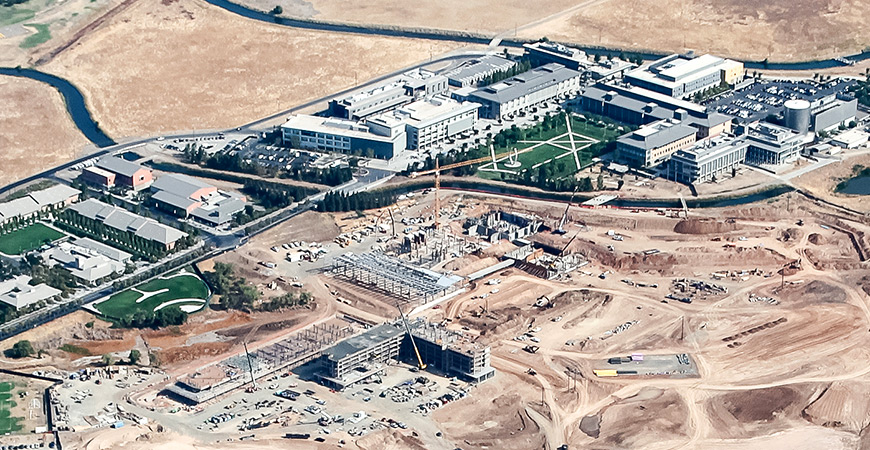 Merced 2020 Project construction (foreground) has employed about 400 workers in one year, most from the Valley.

UC Merced has infused nearly $3 billion into California’s economy since its inception — including more than $1.6 billion in the San Joaquin Valley — in salaries, goods and construction awards.

Those figures take into account work on the Merced 2020 Project, an ambitious and award-winning campus expansion plan that, in its first year, has employed about 400 workers, most from the Valley. About 20 percent of the project’s $1.2 billion design and construction expense — or about $366 million — has already occurred, and the first three buildings are about 50 percent completed and are scheduled to open in Fall 2018.

“UC Merced’s impact on the local and regional economic landscape is undeniable, and continues to grow as the campus expands,” Chancellor Dorothy Leland said. “Even more importantly, our growth enables us to educate more of the best and brightest students from the San Joaquin Valley and throughout the state.”

The economic impact report, generated each fall by the UC Merced Controller’s Office, shows that the university has employed 3,587 people, including students, and that the cumulative total payroll since work began on the campus in 2000 has climbed above $1.23 billion. In August alone, the campus’s payroll expenses, including benefits, totaled more than $15.44 million.

The campus has also directly invested more than $1.62 billion in local purchases, including $229.9 million spent on Valley goods and services, and $156.3 million in construction contracts awarded in the Valley.

Opened in September 2005, UC Merced has grown from an inaugural class of 875 students to a current undergraduate enrollment of nearly 7,400. By 2020, the campus plans to accommodate 10,000 students by doubling its physical capacity in a three-year span, adding more than 1 million gross square feet of academic, administrative, residential and recreational facilities.

According to a third-party analysis by Oakland-based Economic & Planning Systems, The expansion has been expected to generate $1.9 billion in regional economic impact — $2.4 billion statewide — through its completion.

UC Merced is also nearing completion on its 67,400-square-foot Downtown Campus Center, which will bring nearly 300 administrative staff members into the downtown area. The building is scheduled to open in early 2018.