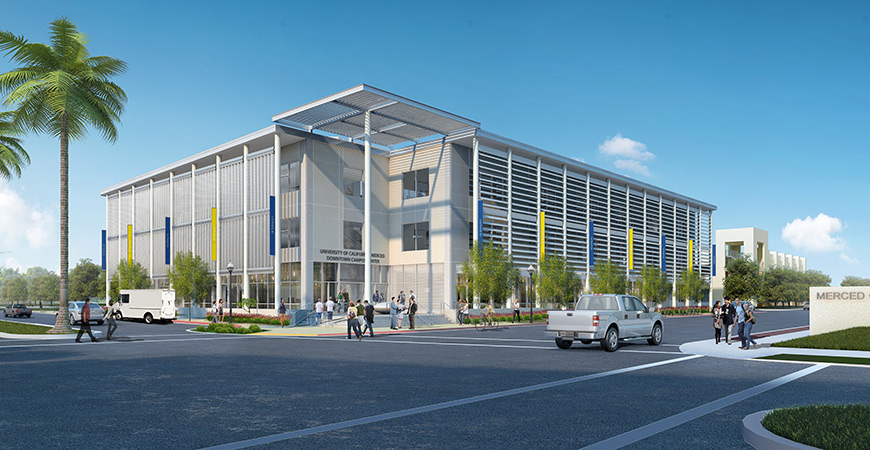 This rendering shows what the completed center will look like when it opens in early 2018.

Thad Raczkowski, co-owner of Little Oven Pizza, is thinking about a move. His shop on Main Street has been so successful, he’s eyeing a piece of property down the road that would enlarge Little Oven’s footprint.

“You can directly connect it to the Downtown Campus Center,” Raczkowski said. “It has brought a lot of attention to downtown.”

“Everyone is talking about being able to get a little closer to the new downtown center,” Matsuo said. “It’s right at the edge of the core downtown district, and it’s really going to help the core expand.”

The MMSA is working up a series of new events designed to draw more people — including students — downtown to see what the city has to offer, as Matsuo encourages people to explore.

“We’ve got all these great mom-and-pop stores down here, a playhouse, the cinema, the older Merced Theater, which brings all kinds of interesting performers — there’s a lot more here than people realize,” he said. “And there’s going to be more. I think that in the next 10 years, downtown is really going to blossom.” 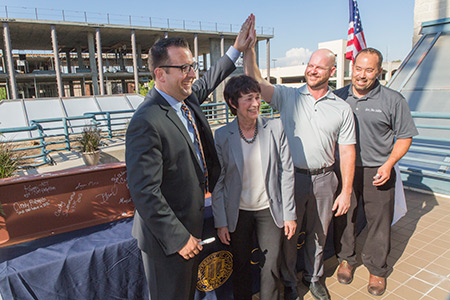 When UC Merced opened in 2005, many thought the community would see an instantaneous transformation. They invested in business and housing, thinking they were going to ride the UC wave.

Then the recession hit. A housing boom started before the campus opened, and then abruptly stopped, leaving housing developments in various stages of completion. Businesses opened downtown and closed up within a couple of years.

Now, however, there is a renewed optimism, both because the economy is improving and because UC Merced is growing. The projects and the university as a whole have drawn a lot of attention from people outside the city, as well, said Frank Quintero, the city’s economic development director.

“UC Merced has enhanced the quality of life here,” he said. “It’s a catalyst for investment and it is bringing a lot of opportunities to the city and the county.”

Quintero pointed to a new coffee shop opening soon at K and Main Street, the purchase and renovation of the old El Capitan Hotel and the Mainzer building, and the fact that the city is still studying the area along 16th Street between G and O for a huge new transportation hub that will feature a high-speed and ACE rail terminal. Businesses that want to open near the Campus Parkway, he said, are also getting excited.

“When people from outside the area come to talk to us, one of the first things they say is ‘Tell us about UC Merced,’” Quintero said. “Being able to connect people with Merced from the Silicon Valley and other areas, combined with a major research university, and we’re right on the brink of big changes.”

Everyone is talking about being able to get a little closer to the new downtown center. It’s right at the edge of the core downtown district, and it’s really going to help the core expand.

Scott McBride, Merced’s director of Development Services, said he sees a lot of investment in housing taking off in the city, too, with almost 800 new apartment units in the pipeline in the next couple of years, and a lot of interest in more.

But right downtown, McBride said, the DCC is creating a market for new retail, restaurants and entertainment.

“The wave is coming,” he said.

“They know their property is going to be worth a lot more in the next few years, so no one wants to sell right now,” he said.

Still, Raczkowski said, there are plenty of opportunities for people to get in on the changing downtown.

“I keep talking to a friend of mine from Oakland about opening a restaurant here,” he said. “Prices are still relatively low, you can afford to live here, and the UC is definitely having a positive effect on the city, especially downtown.”

The employees who will staff the Downtown Campus Center will likely increase lunch traffic, Matsu said. His business has already increased significantly in the past year, and he estimates 35-40 percent of his dinner clientele is UC-connected.

He and other business owners are trying to encourage businesses to stay open later and would love to see an array of different shops, bars and eateries to keep people downtown longer.

Raczkowski agrees that downtown should be a destination, and said once people see the popularity of places like Asip, the new coffee shop, or The Partisan, which is rumored to be reopening soon, they will also want to get on board.

“Once the new downtown center opens,” he said, “people are going to see the changes happening really fast.”