January 12, 2015
UC Merced shatters another record, with nearly 20,000 freshmen and transfer students applying for admission for the 2015-16 academic year 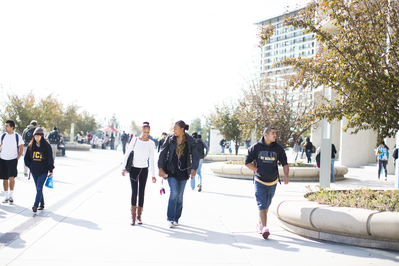 The University of California, Merced, received 19,932 undergraduate applications for Fall 2015, the campus’s largest pool of applicants in its first 10 years and a 14 percent increase over last year’s total of 17,469.

“It’s wonderful to see that interest in our campus continues to climb,” Chancellor Dorothy Leland said. “The strong growth aligns with our long-term enrollment plan to reach 10,000 students and is further proof that UC Merced is developing as a highly competitive and distinctive University of California campus.”

According to data released today (Jan. 12) by the UC Office of the President, 17,611 high school seniors sought admission to UC Merced, compared with 15,264 last year. The campus’s 15.4 percent growth in freshman applications was the highest in the UC system, which saw a total growth of around 7 percent. Among transfer student applications, the campus surpassed its target of 2,000 by 5.3 percent, receiving 2,321 applications for Fall 2015 compared with 2,205 last year.

More applications won’t necessarily equate to a significant increase in the number of students UC Merced admits this year or in the number of students who will enroll, according to interim Vice Chancellor for Student Affairs Charles Nies. The campus’s target for freshman applications for Fall 2015 was 17,000 to fill about 1,600 seats. While UC Merced exceeded the target by 611 applications, space constraints will again limit enrollment in Fall 2015.

UC Merced’s freshman applications continued to show the campus’s diversity, with nearly all ethnic groups showing an increase in applicants over the prior year. African-American applicants showed the largest growth, with a 23 percent increase.

“The strong application growth we’ve experienced this year remains diverse across all student demographics,” Nies said. “This is important as we strive to meet the educational goals for students across California.”

Applications to the UC system as a whole were up nearly 6 percent over last year. Again this year, UC Merced leads the system in applicants who come from low-income households (59 percent), and whose parents didn’t receive a four-year degree (65 percent).

“We believe that the quality of the educational experience and the outstanding student experience that we’ve developed during our first 10 years of operation have contributed to the strong demand for UC Merced,” Nies said.