June 25, 2015
In forthcoming Science paper, UC Merced’s Andy LiWang shows how the shift from nighttime to daytime biological functions depends on the unusual movements of a single protein 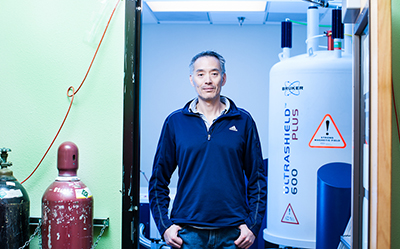 Researchers at the University of California, Merced, have taken another step toward unlocking the mysteries of the biological clock.

In a study published online today (June 25) in Science Express — and soon to appear in print in the prestigious journal Science — a team led by UC Merced Professor Andy LiWang shows how the highly unusual movements of a single protein drives the shift from nighttime to daytime biological functions in cyanobacteria.

“The circadian clock drives powerful rhythms of rest and activity,” LiWang said. “Normally, your internal clock is synchronized with local time. At night, you feel tired, and in the morning, you feel ready to take on the world. You get jet lag when your clock — and therefore physiology and metabolism — are out of sync with your environment.”

Cyanobacteria makes for a good test subject, LiWang said, because of its simplicity and because the three proteins driving its timekeeping system — KaiA, KaiB and KaiC — can be reassembled in a test tube, away from the complexity of live cells, and tick for days and weeks on a lab bench.

The Science study, which builds on LiWang’s previous research, shows that the KaiB protein flips between two distinct three-dimensional folds, which is a rare ability for proteins. When it switches folds, it binds KaiC and captures KaiA, initiating a transition of the circadian cycle and providing the link that joins the timekeeping and signaling functions of the bacteria’s oscillator.

As a photosynthesizing organism, cyanobacteria need the sun to perform life functions. Signals from the clock prepare cyanobacteria for sunrise every day. The highly unusual behavior of KaiB metamorphosis plays an essential role in this regard, LiWang said.

“If you mix cyanobacterial clock proteins in a test tube with an energy source, the test tube literally starts ticking,” LiWang said. “You can tell time by it. How do these clocks manage to go at a 24-hour pace?”

LiWang has received more than $2 million in grants from the U.S. Air Force, the U.S. Army and the National Institutes of Health to continue building a body of knowledge about how circadian clocks tick. Thousands of soldiers are deployed all over the world, and the military is interested in minimizing health problems related to jet lag and maximizing performance.

“They appreciate the long-term implications of what we are doing,” said LiWang, whose lab is housed at the Castle Airport Aviation and Development Center in Atwater.

He also credited much of his success to the support of the administration at UC Merced and in the School of Natural Sciences. For example, the school recently began funding the support and maintenance of a nuclear magnetic resonance (NMR) spectrometer that was originally purchased by Andy and Patricia LiWang and maintained by the couple for years using their startup funds and grants.

LiWang’s publication in Science marks the first time the prestigious journal has published original research with a faculty member from the UC Merced School of Natural Sciences as corresponding author.

“Professor LiWang’s publication in such a high-impact, world-renowned journal confirms his place as a leader in the field and puts UC Merced firmly on the map as a world-class research institution,” HSRI Executive Director Trevor Hirst said. “These papers also attract increased funding from federal agencies, foundations and donors, which are essential to the continued growth of UC Merced and HSRI.”

With a new $20 million federal grant, UC Merced becomes part of a multi-institutional research collaborative to develop artificial intelligence — or...

As part of its commitment to inclusive excellence in graduate research and education, UC Merced has awarded its new Chancellor’s Fellowship for...

More than 100 sociology undergraduate students got the opportunity to conduct research about social movements and civic engagement in Central...