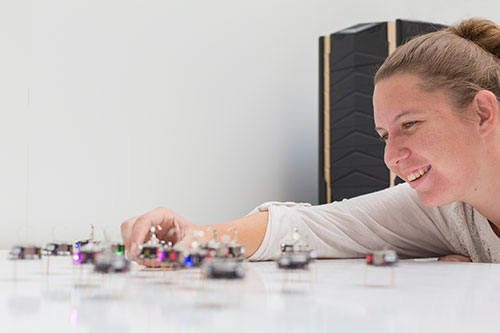 All of life is motion — whether it is molecules shuttling around within our cells or flocks of birds in the sky.

Physics Professor Ajay Gopinathan, with the School of Natural Sciences, and the researchers in his lab are investigating the general principles governing such biological transport — understanding how reliable transportation occurs in biological systems across different levels of organization and scales in complex settings.

Such settings include the crowded interior of cells, where an array of dynamic protein filament tracks direct intracellular traffic. Work in Gopinathan’s lab, featured on the cover of a recent Biophysical Journal issue, shows the filament network’s structure is as important in determining how cellular transport goes as a road network is to vehicular traffic. The lab, led by then-graduate student David Ando — now a postdoctoral researcher at Lawrence Berkeley National Laboratory — and in collaboration with Professor K.C. Huang's group at Stanford University, also found that cells can tune this network to optimize transport.

Another aspect of transport is the emergence of collective motion.

And all around us, there are examples of motion in concert — collective behaviors among groups of organisms from bacterial colonies and bird flocks to fish schools and insect swarms.

Living things flock for a variety of reasons: to search for food, because there’s safety in numbers; it’s easier to find a mate in a large group; and some, like penguins, even flock for protection against extreme temperatures. They also transfer experience from older flock members to younger ones in groups.

But even inanimate self-propelled objects under the right conditions, or drones with the right set of rules, will swarm.

Scientists know individuals in groups swarm or flock by communicating, whether by releasing chemicals, as in the case of bacteria, or by watching their neighbors for visual clues, as birds do.

For example, in murmurations of starlings, which form into beautiful, undulating patterns and execute complex group movements, the birds don’t need a leader, Gopinathan said. Each one looks to his or her nearest neighbors and goes in the “average” direction.

“Even in large flocks, they don’t need to see the whole group,” he said. “They only need to communicate with a few neighbors, and they move as one, even though there’s no central command.”

His lab is particularly interested in how collective behavior systems deal with disorder — i.e., what happens when there are individuals with defects, and how environmental disorder affects flock behavior.

“Transport occurs in what I call very ‘noisy’ conditions; at the cellular level, things are bumping into each other all the time on roads that are constantly changing,” Gopinathan said. “It’s the same for birds and locusts. They have to deal with weather, air currents and other obstacles as well as variations in behavior between individuals. So how do they deal with those?” 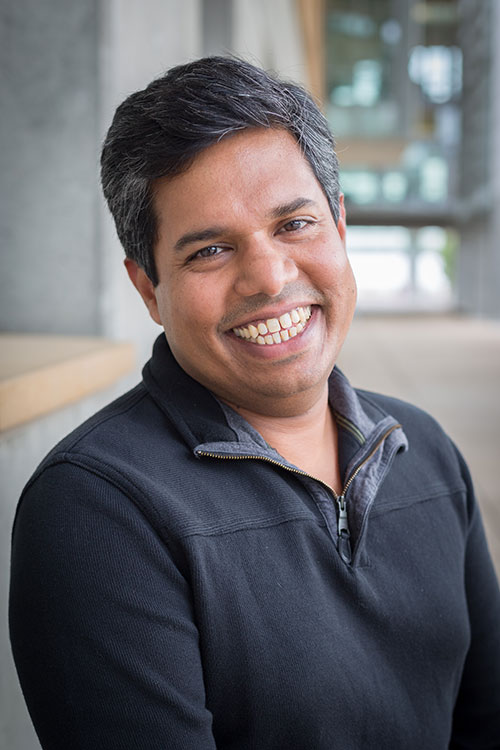 Gopinathan shared ideas about the physics of flocking with groups of school children at the Aspen Center for Physics in Colorado this summer, and was interviewed on public television while there.

He found these concepts engaged audiences quite well, especially when people understand the potential for practical applications.

“Researchers could learn how to control swarming in such systems as the bacteria that form biofilms — which are responsible for health issues from the plaque on teeth to infections in the inner lining of the heart — with obvious health benefits,” he said. “They could even get man-made systems, such as robots or driverless cars, to flock in designer formations to explore remote terrains or eliminate gridlock on freeways.”

World’s Tallest Trees Shape the Diversity of Life in Their Soils, Study Shows