Professor Danielle Edwards is part of a team of researchers that made a huge discovery recently about two groups of giant Galapagos tortoises — they are actually two different species.

“It’s not every day you can name a new species of major vertebrate,” Edwards said.

“This is an exciting moment in the history of Galapagos giant tortoises,” said Linda Cayot, science advisor for Galapagos Conservancy. “Over the last several years, the ever-growing role of genetics in guiding development of conservation strategies for Galapagos tortoises continually requires us to think in new ways.”

Edwards conducted much of the population genetics analyses — using repeat fingerprinting markers similar to those used in forensic research — that let the team distinguish between the closely related species.

Edwards, a new professor with the School of Natural Sciences, analyzed genetic data from old skeletons and a bit of tortoise bone from the British Museum, because it is illegal to take live specimens from the endangered tortoises.

“Ancient DNA work is very intensive,” she said. “It took a while just to get the sample from the British Museum, and longer to do the work.”

On Santa Cruz Island in the center of the Galapagos Archipelago, two populations of giant tortoises occur — one on the west side of the island in an area known as La Reserva and one on the lower eastern slopes near a hill named Cerro Fatal. 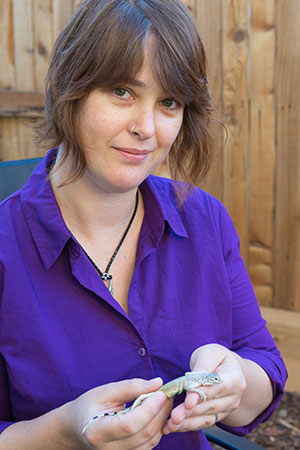 Until now, it was assumed these groups belonged to the same species, even though they didn’t really intermingle. But the international research group, led by Yale University and including Edwards, has now clearly identified these two populations as the Western Santa Cruz Tortoise (Chelonoidis porteri) and the newly named Eastern Santa Cruz Tortoise (Chelonoidis donfaustoi).

The researchers could observe some differences, Edwards said, such as the shapes of their shells and the difference in sizes between males and females.

“In both groups, the males are always bigger, but in one group, they are much bigger than the females,” she said.

Giant tortoise populations were devastated throughout the Galapagos Islands because of human exploitation over the centuries, the Galapagos Conservancy said. The Western Santa Cruz Tortoise population has a few thousand individuals, but the Eastern population numbers in the hundreds. Its distribution, nesting zones, abundance and potential threats are not well known.

The Giant Tortoise Restoration Initiative — a collaborative project of the Galapagos National Park Directorate, the Galapagos Conservancy, the researchers in this Yale-based group and others — is focused on the long-term restoration of all Galapagos tortoise populations to historical numbers. Special emphasis will now be placed on the Eastern Santa Cruz Tortoise, the conservancy said.

“Now that it has been described, the Galapagos National Park can start conservation measures, especially for breeding,” Edwards said. “They are very successful with captive breeding, and are also very good at incorporating cutting-edge genetic research into their conservation management strategies.”