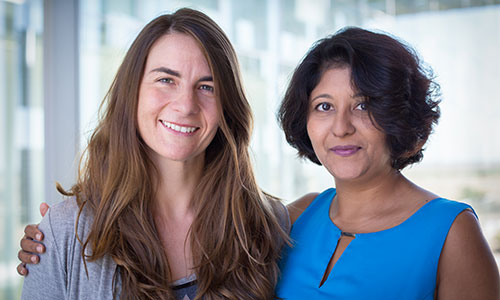 Professors Linda Hirst and Sayantani Ghosh are combining liquid crystals with nanoparticles such as gold and quantum dots to come up with a new platform that could have applications in fields such as optics and medicine.

And the two new grants the School of Natural Sciences researchers have earned could help take their creations out of this world — literally.

A National Science Foundation grant of $410,000 will help Hirst and Ghosh study the fundamental physics behind the capsules that form when the two materials are combined.

“Usually, nanoparticles stick together and are hard to control,” Hirst said. “But we’ve attached molecules synthesized here with our collaborator, chemistry Professor Jason Hein, to help them assemble into shapes. That gives us much better control. It’s really a new process.”

The tiny capsules — actually thin, spherical shells — cannot be seen with the naked eye. They form after heated liquid crystals infused with the nanoparticles begin to cool.

“I’ve never seen capsules that are entirely or highly concentrated with nanoparticles before,” said Hirst, who is also affiliated with the Health Sciences Research Institute. “Liquid crystals and nanoparticles — we don’t often think of them going together.”

The capsules can contain solutions and be broken open with light that heats them. What researchers choose to put inside the capsules can vary, and could include medicine.

Ghosh and Hirst also received a $25,000 seed grant from a collaborative program offered by the University of California Institute for Mexico and the United States (UC MEXUS) and Mexico’s National Council for Science and Technology (CONACYT).

They will work with Professor Guzmán López, a physicist at the Universidad Autónoma Metropolitana (UAM) in Mexico to develop highly detailed models of the new capsules so the researchers can fully understand them.

“We know that they form these shells, but we need to have a good understanding of how and why, so we can make the best use of them,” Ghosh said.

Ghosh, who also works with the new NASA-funded Merced Nanomaterials Center for Energy and Sensing (MACES), envisions tying the two projects together to possibly deliver a way for NASA to prepare astronauts for space flights by injecting them just under the skin with the shells containing treatments for various issues. If a health problem arose, an astronaut could use a handheld light to heat the gold particles in the nano-shell, which would break them open and release medication.

“It could be good for anyone in remote locations,” she said.

Back here on Earth, she said, the capsules themselves could be injected into malignant tumors and heated, potentially killing cancer cells and also delivering medication once they break open.

Makiko Quint, one of the graduate students working with Ghosh and Hirst, has initiated a collaboration with Stanford University Professor Kerwyn Huang to further develop some of the bioengineering applications.

Hirst said she, Ghosh and student researchers will also work on forming the capsules with quantum dots, which can change the wavelength of light. They want to come up with a way to form the shells into flat sheets that could be applied as a coating.

A capsule-coating could improve the quality of television pictures, could be used in solar collection or in any application where lights get hot. They are stable up to 150 degrees.

The collaboration has so far resulted in several papers, including some published in the journal Soft Matter, and will likely result in many more, the researchers agreed.

The shared grant with Mexico will also allow an exchange of researchers between the two labs. Some students from UAM and their professor will visit UC Merced to be able to see the materials they are modeling. Graduate and undergraduate students from UC Merced will also travel to Mexico to learn how the researchers there are preparing the models.