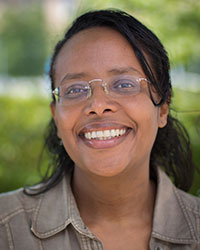 Most people don’t spend a lot of time thinking about the dirt under their feet. But a new article co-authored by UC Merced Professor Asmeret Asefaw Berhe and published this week in the prestigious journal Science provides plenty of reasons why we should.

Soil health isn’t just a matter of agricultural security, it’s about human security, the authors point out in “Soil and Human Security in the 21st Century.”

“We need to raise the conversation about soil degradation to the same level as the other existential problems humanity is currently facing,” Berhe said. “If people care about where we are going as a species, they need to stop and think about this. Soil makes life in the terrestrial ecosystem possible.”

The 1 meter of topsoil we often call “dirt” is actually the life-sustaining critical zone in the earth system where we grow food and on which we build most of our engineered structures.

Soil supports all of the world’s terrestrial ecosystems — plant and animal — and is a major source of biodiversity in itself. A single teaspoon of healthy soil can have up to a billion individual organisms. The 4 million distinct taxonomic units of bacteria in 1 ton of soil exceeds the bacterial diversity of all of the world's oceans, which have 2 million different groups of organisms.

Soil grows the plants we use for food and to create the fibers that make clothing, Soil filters our water so it’s safe to drink. It sequesters carbon, helping offset some effects of climate change, and it’s where we grow plants for energy production, such as ethanol.

“We’re not buried in trash right now because a healthy soil ecosystem is efficient in waste and nutrient processing and recycling,” Berhe said.

But more than half of the world’s most productive soil is considered physically and/or chemically degraded.

The professor, with the School of Natural Sciences, is an invited member of the Standing Committee on Soil Science at the National Academy of Sciences (NAS), and she worked with some of her fellow committee members to write the Science article and start an important conversation among policy makers and the public.

“We know what the problems are and some of the remedies, but we need to educate stakeholders and policy makers about the gravity of the challenges we face. And the education needs to be backed up by political will to make significant changes,” Berhe said.

The United Nations designated 2015 the International Year of Soils, and other organizations are trying to move the conversation forward, as well. But it can be a challenge to get people to understand how interrelated ecosystems are, and to get them to look at the bigger picture.

In the Science article, Berhe and her colleagues point out that human activity has put soil systems out of balance and that soil management for the future must pace human use of soil with the planet’s ability to renew itself.