Climate Scientist Aims to Change National Dialogue, One Story at a Time

Climate scientist Emmanuel Vincent noticed climate change discussions in Europe had become somewhat politically polarized before he left France a few years ago, and found the same situation on a larger scale when he came to America.

Vincent, now a project scientist with UC Merced’s Center for Climate Communication and the leader of ClimateFeedback.org, wants to see if discussions that are more rooted in science will defuse some animosity and change the conversation. He’ll study that idea by having scientists review and comment on science journalism, using an app that lets all readers see their annotations. 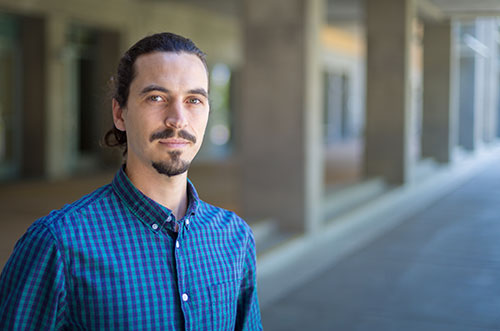 A group of 25 to 30 scientists are participating in Vincent’s study. They are asked to look at and annotate articles about climate change in large publications, such as the Los Angeles Times, that are likely to influence people’s conversations.

“We scientists each have our specialties; we want to be able to cover all aspects of climate change by each commenting on our field of expertise,” Vincent said.

One of the first annotations this summer focused on an analysis of Pope Francis’ “Encyclical Laudato Si.” Nine climate scientists analyzed the article and rated its overall scientific credibility as high.

Each panel member is asked to evaluate the science in newspaper articles, then rate each article on its scientific credibility using a set of specific standards. Bay Area-based Hypothes.is, which developed the app, is scheduled to launch its “group feature” this summer to allow multiple comments and conversations. That’s when Vincent plans to ramp up his study, carrying it through the end of the year. He hopes to present results at a large climate conference.

Vincent is working with Professor Teenie Matlock, who started the Center for Climate Communications as part of the Sierra Nevada Research Institute. Matlock, a cognitive scientist who, in part, studies the semantics of politically charged language, plans to collaborate with Vincent to learn about how scientists’ comments affect readers’ perception of articles’ credibility.

One challenge science journalists face is conveying highly technical information to audiences that have little or no scientific expertise. Scientists can also find it difficult to communicate their work on a level the general public can understand and relate to. Another challenge, Vincent and Matlock said, is that language about climate change naturally includes uncertainty, and even though uncertainty is part of everyday life, some people are uncomfortable with it.

But one of the biggest challenges lies with the small percentage of people on the far ends of the political spectrum who simply do not believe climate change is real.

“I don’t think we’re going to change the minds of hardcore believers or deniers,” Vincent said. “My goal is to speak to the people in the middle who might be confused by the amount of contradictory information coming at them and just say ‘I don’t really know.’”

The app can also let journalists add notes that might help explain more difficult concepts to interested readers, while scientists might choose to add more information or hold a discussion about a scientific concept presented in the article.

By letting readers see the annotations — and filter out any they don’t want to see, such as notes from non-scientists — Vincent hopes the discussion about climate change can become more grounded in science.

He also hopes to partner with universities and help teachers use the annotation app to teach critical thinking to their students and get them used to analyzing issues from a science-based foundation.