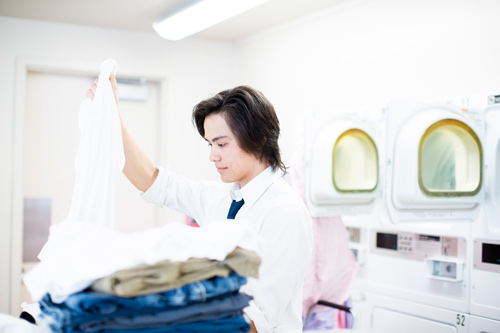 UC Merced’s 2,100 resident students are gearing up for a month-long battle in which no one will get hurt. They might have greasy hair, though.
The 2014 Water Battle – to see which residence hall can save the most water – runs from Oct. 1 through 31, and organizers said they are excited to see what the students can do just by making a few simple changes.
“We encourage them to take shorter, fewer showers, to flush less, to not brush their teeth in the shower, to wash only full loads of laundry and to make sure they don’t run the faucet while they lather their hands,” said Gabriel Morabe, project coordinator for the Power Save Campus program through the Alliance to Save Energy.
The 4-year-old competition recently received the Best Practices in Student Sustainability Programs award from the California Higher Education Sustainability Conference, a first for the UC Merced campus.
Then-student Martin Figueroa started the battle because, he said, he wanted to challenge students to get involved in water conservation.
“I had been doing energy competitions in the residence halls for about two years, and I thought it was weird that no other school focused on water,” Figueroa said. “I thought it would be fun for students to compete in reducing water usage especially because our area is very dry and water is in high demand.”
With help from some campus leaders, Figueroa partnered with a start-up company to develop an online water-monitoring dashboard that incorporated social networks, educational concepts and real-time data flow.
This year, organizers are launching a new dashboard. Everyone will be able to see which hall is saving the most water on any given day, how much has been saved overall, and whether the system has detected any leaks on campus that need repairs.
In the 2013 competition, the residents saved 44,000 gallons just by changing their habits, and detected 15 leaks, which saved countless gallons more.
“This was the biggest competition we have done, involving 14 buildings and more than 2,000 students,” Figueroa said. Kern and Calaveras halls tied for first place.
Morabe took a baseline water-usage reading in September, and said he wants to do everything he can to encourage students to stay well below that level. There’s no overall goal in terms of number of gallons, it’s just to save as much as possible.
The winning team gets a pizza party, though Morabe said he’s working on some changes for next year, including linking the contest to CatCards so students in the halls that save the most water each day can swipe their CatCards and redeem points for small prizes like a free coffee or a meal, as well as a bigger grand prize. But that takes funding, and he’s doing everything this year on a $500 budget, including fliers, events and the grand prize.
Morabe said the competition is designed to teach habits people can easily practice, creating a culture of conservation that will follow the students throughout their lives.
It seems to be working because Figueroa said students don’t tend to go back to their old habits once the battle ends, and they have asked why the competition doesn’t last longer than a month.
“I hope students will learn and understand the importance of conserving water, especially now that California is facing such a terrible drought,” said Figueroa, who won the Brower Youth Award from the nonprofit Earth Island Institute for devising the competition. “Water is a critical resource for the existence of life, and there is no alternative. I hope this small project can serve as an example for others to get involved and implement similar projects on their campuses.”

The University of California, Merced, continues its historic climb in the venerable US News & World Report rankings of U.S. universities, with...

UC Merced’s superb sustainability and environmental reputation continue to be a powerhouse, with The Princeton Review placing the campus among only...