The discovery of a new, rare species of monkey flower by Professor Jason Sexton provides clues as to how new species are born.

Sexton, who researches the monkey flowers that grow wild throughout California, and are especially prolific in the Sierra Nevada, conducted this work with researchers Kathleen G. Ferris and John H. Willis, both from Duke University.

They found what they at first assumed to be a variant of the cut-leafed species of monkey flower in the Butte-Plumas counties area, growing on Sierra granite outcroppings. The flowers begin their short lives sprouting among wet mosses on rocky slopes. But as the weather warms and the water dries up, the environment becomes increasingly harsh and the flowers wither like the moss.

The researchers collected seeds and grew what they thought were all the same species. But Sexton said the new monkey flower, or Mimulus filicifolius, only looks similar to another species of flower with divided leaves, Mimulus laciniatus. Both are found in small areas, but filicifolius’s habitat is even rarer and more specialized, and its leaves look like ferns, whereas laciniatus’s leaves have fewer divisions on them.

“The two kinds are highly self-pollinating,” Sexton said. “That’s an adaptation for growing in a harsh environment.”

The findings, “Speciation on a Local Geographic Scale: the Evolution of a Rare Rock Outcrop Specialist in Mimulus,” were published in Philosophical Transactions of the Royal Society B: Biological Sciences. The journal, the oldest scientific journal in the English-speaking world, was established in 1665 by the Royal Society of London for Improving Natural Knowledge. 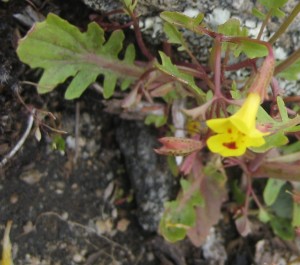 “The fact that M. filicifolius and M. laciniatus both have lobed leaves but are not each other's closest relatives indicates that a lobed-leaf shape has evolved twice, independently, in this group of wildflowers,” Ferris, the paper’s first author, said via email. “This is exciting because both species also occupy dry, exposed-rock outcrops that are different from other close relatives that live in grassy seeps and streams.

“The independent evolution of a similar leaf shape in two species that occupy similar habitats is evidence that lobed leaves are adaptive in rock-outcrop environments.”

Understanding conservation and populations is important as species continue to go extinct. In this vein, unique populations, even if very small, can spawn new species, Sexton said

Speciation, the evolutionary process by which new biological species arise, has until recently been thought to happen only over great time and distance.

“How can that happen in the range of another species?” Sexton said. “But we have evidence that it does. It helps explain how nature can keep packing in species in places like the tropics, which are crowded with diverse species already. Even within a set of close relatives, you can have new species evolving.”