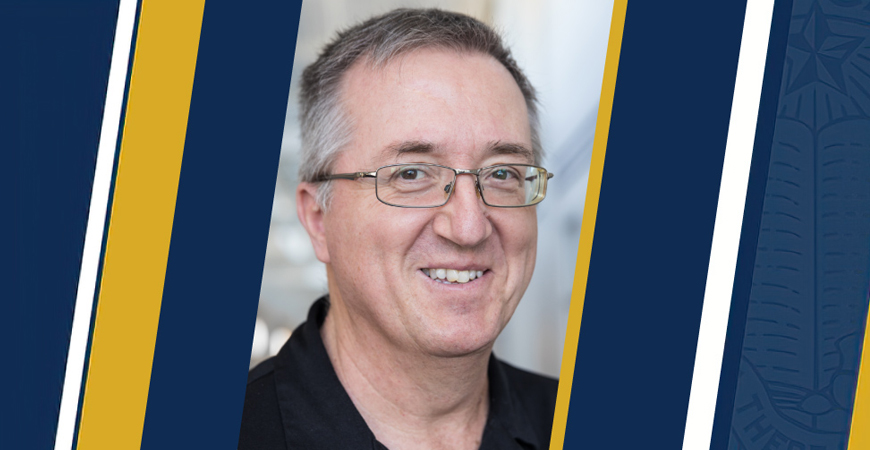 Professor Manuel M. Martín-Rodríguez has been with UC Merced since 2004. Photo by Veronica Adrover.

A UC Merced professor is being recognized by a major organization for the work he has accomplished related to the Spanish language. Literature Professor Manuel M. Martín-Rodríguez will be the latest permanent member inducted to the North American Academy of Spanish Language during a virtual ceremony on Friday.

The North American Academy of Spanish Language, known as Academia Norteamericana de la Lengua Española (ANLE) in Spanish, is the equivalent of the language academies that all Spanish-speaking countries have — the first being the Royal Spanish Academy (Real Academia Española). Although not affiliated with the government of any country, ANLE represents the U.S. and Canada and is a full member of the Association of Academies of the Spanish Language, which is the body that centralizes the joint activity of all the language academies.

With this acknowledgement, the founding faculty member is being recognized for the work he's done over the last 35 years to recover and study literature and linguistic expression in Spanish. Martín-Rodríguez is honored for the possibility of contributing to the expanding knowledge of the Spanish language in this country.

"The Spanish language has been present in the current territory of the United States since the 16th century. It's been more than four centuries of uninterrupted use, both in matters of daily life and in literary and cultural aspects," he said. "Today, more than 40 million Americans express themselves in this language, for which it is an immense honor to be part of the Academy whose main mission is 'to ensure that the Spanish used by all Hispanic Americans serves as a basis for the strengthening of authentic bilingualism that enriches the culture of the United States.'"

This induction holds great meaning not only for Martín-Rodríguez but for the university as well.

"For UC Merced, it represents great visibility and leadership in the field of Latino and Hispanic studies," he said.

Only two other professors in the UC system, Milton M. Azevedo of UC Berkeley and Víctor Fuentes of UC Santa Barbara, both emeriti, are permanent members of the Academy. Martín-Rodríguez will now be the only active UC professor in this position.

In order to reach this point, the permanent members of the Academy held a vote following the professor's nomination by one of the members, taking into consideration his career path and how he has contributed to the organization's goals. This appointment automatically entails membership in the Royal Spanish Academy as a corresponding member as well. Only 35 people from the U.S. and Canada are permanent academics in the ANLE.

Martín-Rodríguez has studied Latino literature of the U.S., from the earliest work to some of some of the most recent. He has published nine books and almost 100 articles.

Some of his publications are regarding Gaspar de Villagrá and his extensive poem "Historia de la Nueva México" (1610), which is considered the earliest literary work in the U.S., Martín-Rodríguez said. He has carried out numerous investigations in archives and rare book libraries and has discovered numerous documents about the author, which is why Martín-Rodríguez is considered by many to be the leading expert on Villagrá.

Martín-Rodríguez has published multiple books on Chicano literature and dedicated many years to recovering the work of Latino writers from the U.S. whose work had been lost. This entailed intensive work, including having to painstakingly go through thousands of newspaper copies.

His work is reflected in the courses he teaches at UC Merced, as well as in research projects in which he has trained undergraduate students to work with old newspapers in search of information about the linguistic and literary past. Several of these students have gone on to graduate programs in Chicano studies among others.