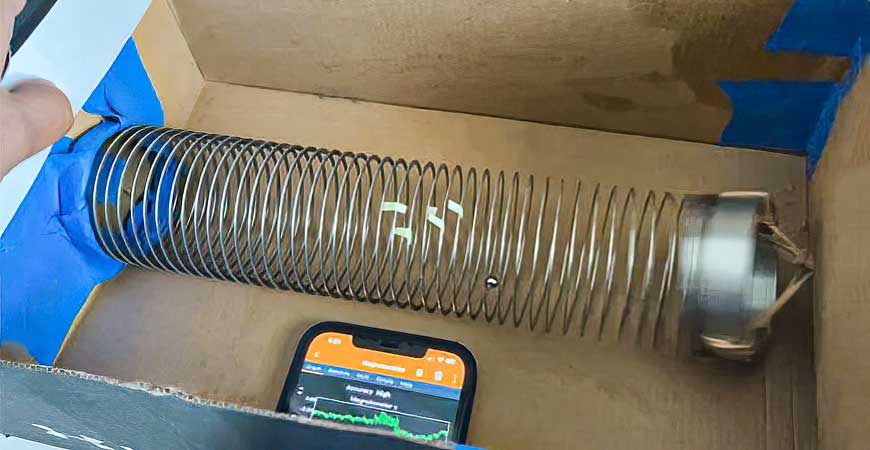 With her students spread to the four winds by COVID-19, a UC Merced professor discovered she could build engagement in a virtual classroom with cardboard, painter’s tape and a child’s toy.

For the 2021 spring semester, Professor Jing Xu sent students in her Modern Physics Lab course kits with which they built simple but effective instruments that allowed them to develop experiments, then document and present the results.

Without these homemade, hands-on instruments, students in the remotely taught Physics 160 class would have depended on simulations that played out on their laptops. Effective, sure, but not nearly as fun, student Jonathan Loera said.

“I was so used to feeling limited learning from home. I think that was a very common experience,” said Loera, a physics/chemistry double major who will be a senior this fall. “But Physics 160 turned the tables on that. It was like, no, let’s do more.”

The kits were simple. Inside were materials and instructions to build virtual reality glasses and a spectrometer. The kit also contained several versions of a pre-compressed helical spring – a Slinky – for longitudinal wave experiments.

Student Calista Lum used her spectrometer to test the effectiveness of light-protective glasses.

To this toolset the students contributed powerful computers they carry everywhere – their phones. Using their iPhone or Android handsets – some also used Apple Watches – they recorded slow-motion video and downloaded apps that turned their phones into accelerometers and magnetometers.

Xu, who describes herself as an experimentalist at heart, said the kits allowed her undergraduate students to have a taste of what she loves about physics. “You can imagine a sort of vague boundary between what we know and what we don’t know,” she said. “You form a hypothesis, take an educated best guess about what’s happening.

“They were able to work on homework projects that had no clear solution. That’s very different from the usual undergraduate experience, where you already have the solution and it’s your job to get it right.”

Xu, with support from School of Natural Sciences Dean Betsy Dumont, Physics Chair Ajay Gopinathan, and Instructional Laboratories Coordinator Donna Jaramillo-Fellin, secured the funding for the kits and got them mailed out in time for the start of the semester. Graduate student John Wilson was the course’s teaching assistant.

They were able to work on homework projects that had no clear solution. That’s very different from the usual undergraduate experience, where you already have the solution and it’s your job to get it right.

Loera, along with fellow seniors Calista Lum and Donovan Bercasio, all developed experiments on whether scary videos, shown on the VR glasses, affected viewers’ heart rates (they did). Lum, a physics major from Fairfield, used her cardboard-tube spectrometer to determine whether different types of protective glasses filter light effectively.

“I appreciated the evidence that my $10 blue-light glasses from Target actually filter some light,” Lum said.

“Professor Xu and John made the class very fun and entertaining,” said Bercasio, a physics major from San Diego. “It was one of my favorite classes at UC Merced.”

In another experiment, Loera fine-tuned the setup for a metal Slinky to improve measurements of longitudinal waves. A shoebox, some tape and a Sharpie pen reduced vibrational interference and cleaned up the data. Loera dubbed his hand-built instrument the Fixed-Elastic Longitudinal-wave Propagator – FELP, for short.

“I was thinking, ‘You know, I made this at home,” Loera said, “so no one’s going to stop me from giving it a cool name.’”

As a young child, Professor Michele Nishiguchi would dive off the couch and into the shag carpet reefs of her family home, mimicking the turns and leaps...

Is a Great Lecture Better Than Active Learning? Students May Think So But Study Says Otherwise

Students who take part in active learning — engaging directly with the instruction process — learn more than they would from an excellent...