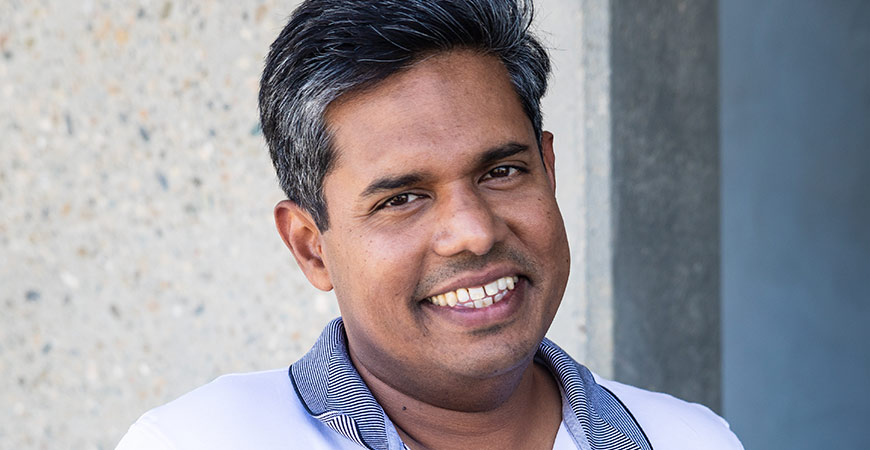 Professor Ajay Gopinathan has been elected the next vice-chair of the Division of Biological Physics. Image by Veronica Adrover.

Professor Ajay Gopinathan has been elected the next vice-chair of the Division of Biological Physics (DBIO) of the American Physical Society (APS), the world's largest organization of physicists. He will serve as vice-chair in March 2023, then move into the positions of chair-elect, chair and past chair, each for one year.

Gopinathan, who is chair of the Department of Physics in the School of Natural Sciences, has been involved with the APS since he was a student in the early 2000s.

“I hope to be able to bring people together to achieve our division’s common goals,” Gopinathan said. “These include recruiting more young scientists into DBIO research areas, nurturing and promoting emerging research areas, connecting us to the wider biological research community and building a diverse, vibrant and fully engaged biological physics community.”

The APS works to advance and share the knowledge of physics through research journals, scientific meetings, and education, outreach, advocacy and international activities. The organization represents more than 55,000 members, including physicists in academia, national laboratories and industry in the United States and throughout the world. The APS publishes more than a dozen scientific journals, including Physical Review and Physical Review Letters, and organizes more than 20 scientific meetings each year.

The Division of Biological Physics has about 2,000 members and supports all the ways physical science can help understand biological systems — from nanoscale biological proteins all the way up to organisms and their behaviors, according to the APS website.

Gopinathan’s group uses theoretical and computational methods to explore the basic physics underlying a variety of biological transport processes. Examples of his group’s research include understanding the role of mechanical coupling and interference among molecular motors in cargo transport within cells; how such transport is affected by the internal structure and dynamics of the cell; and the effects of cell-cell interactions and different cell types in collectively migrating tumor clusters and developing vascular networks.

Gopinathan earned his undergraduate degree in physics from the Indian Institute of Technology, Kanpur and his Ph.D. in physics from the University of Chicago. Following a postdoctoral stint at UCLA and UC Santa Barbara, Gopinathan joined UC Merced in 2006 and was among the first occupants of the first Science and Engineering 1 building. He has helped build the Department of Physics, as well as co-founding and co-directing the Center for Cellular and Biomolecular Machines (CCBM), a National Science Foundation Center of Research Excellence in Science and Technology. He is also a director of the new National Institutes of Health-funded G-RISE graduate training program.

He has been recognized with the 21st Century Science Initiative Award from the James S. McDonnell Foundation and named a Scialog Fellow by the Moore Foundation and Research Corporation. He was also recently elected an APS fellow, an honor limited to no more than one half of 1 percent of the membership.