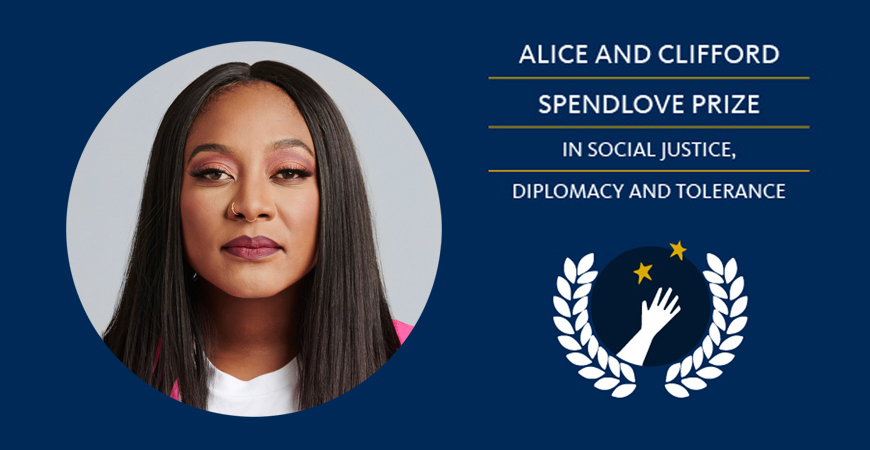 Civil rights activist Alicia Garza is the 2021 recipient of the Spendlove Prize.

Alicia Garza, civil rights activist and co-founder of #BlackLivesMatter and the Black Lives Matter Global Network, will be honored as the 13th recipient of the Alice and Clifford Spendlove Prize in Social Justice, Diplomacy and Tolerance during a virtual award ceremony on April 20.

Garza was raised by a Black mother and Jewish stepfather in the San Francisco Bay Area. She honed her activism through her years at UC San Diego, while fighting for higher pay for janitors, and has spent her life working to improve others' lives through organizations such as Black Lives Matter, National Domestic Workers Alliance, People Organized to Win Employment Rights and Supermajority.

In recent years, the Black Lives Matter movement has resulted in millions of people around the world demonstrating their discontent, rage and demand for change in the "ways that governments and societies have treated and continue to treat Black people," according to Nigel Hatton, a professor in the Department of Literatures, Languages and Cultures at UC Merced. "For Garza, respecting the fundamental human rights of Black people will inevitably improve the lives of everyone."

Garza is a powerful voice in the media and frequently contributes opinion pieces and expert commentary on politics, race and more to outlets such as MSNBC and The New York Times. She was named one of TIME's 100 Most Influential People in the World in 2020 and made Bloomberg's 50 and Politico's 50 lists.

The Spendlove Prize was established at UC Merced in 2005. The award is made possible by a generous gift from Merced native Sherrie Spendlove in honor of her parents, Alice and Clifford, who were focused their whole careers on improving the lives of children, particularly those with challenging circumstances.

The prize recognizes a renowned scholar, author, artist or citizen who exemplifies, in their work, the delivery of social justice, diplomacy and tolerance in the diverse local and global society. The recipient serves as a role model and inspiration for students, faculty, staff and the community surrounding UC Merced.

"Alicia Garza was selected to receive the 2021 Spendlove Prize because of her tenacious work to help improve the lives of countless people who may feel they have no voice," Sherrie Spendlove said. "We are living in uncertain times, which makes her work that much more important and vital across the globe."

School of Social Sciences, Humanities and Arts Dean Jeffrey Gilger echoed the sentiment that the award provides a channel for people to be heard near and far.

"Alicia Garza will be a wonderful addition to the family of Spendlove Prize recipients," he said. "Sherrie, like her parents, Alice and Clifford, believes that the people of our region and the world represent great diversity of thought with voices that need to be heard. The Spendlove Prize brings these voices to our students and our community in the spirit of education, dialogue and hope."

This year, the award committee is chaired by Gilger and includes Spendlove as family representative, Hatton as a member of the faculty and Lee Anderson and Charlie Bennet as members of the local community. Due to the coronavirus pandemic, the undergraduate and graduate student positions left vacant after the previous students departed have not been filled.

The free event on Tuesday, April 20, gets underway at 6 p.m. Anyone interested in watching the virtual ceremony is asked to register online. Questions regarding the event can be sent via email to specialevents@ucmerced.edu.