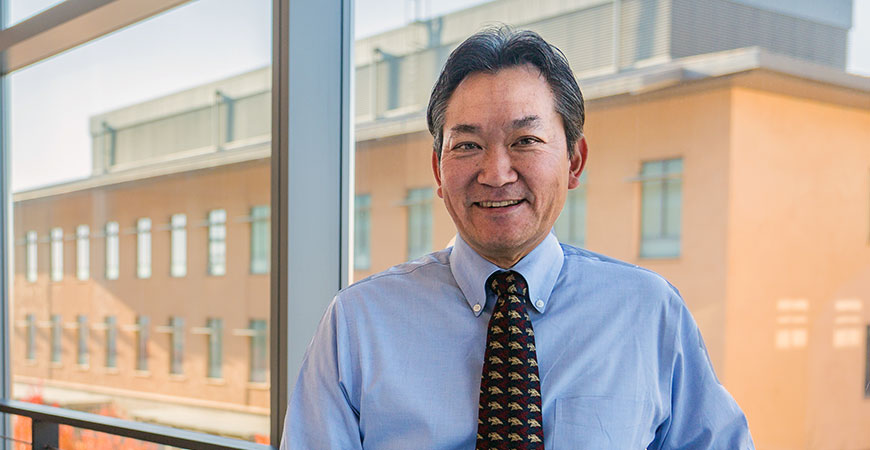 Molecular biology Professor Chris Amemiya and his former graduate student Molly Phillips have made a discovery that upends traditional ideas about a structural polysaccharide called chitin that is found in some fish.

Over the course of their studies, they collected evidence that chitin — which until recently was believed to be only found in non-vertebrate organisms such as crabs’ hard shells or squids’ beaks — is synthesized inside the electrosensory organs of cartilaginous fishes such as sharks, skates, rays and chimaeras.

The results were “very surprising,” said Phillips, who defended her Ph.D. dissertation on the subject this spring and is the lead author on a new paper published in Current Biology today.

“It’s been exciting as well as puzzling,” Phillips said. “Is this material really chitin?”

Chitin is a known component of a number of rigid biological structures, such as exoskeletons. But in cartilaginous fish — those with skeletons of cartilage rather than bone — evidence shows that chitin is a component of a gelatinous substance that fills the insides of their Ampullae of Lorenzini (AoL). These specialized electrosensory organs detect environmental electric field signals emitted by prey or potential mates.

The AoL comprise a collection of gel-filled tubes that run beneath the skin’s surface and open to the environment via conspicuous pores visible on the snouts and cheeks of the fishes.

The researchers began this work at the University of Washington and made the discovery almost accidentally, using homemade fluorescent molecular probes that attach specifically to chitin.

“We were coming off of our lab’s initial discovery of chitin in vertebrates and were exposing a variety of fish species to fluorescent chitin-binding probes,” Phillips said. “We had already seen signatures of chitin in the gut and skin of some fishes and amphibians and wanted to see how consistent this finding was across all vertebrates and where else chitin might be found.”

“When we searched for chitin signals in embryonic skates, we were astonished to see them so clearly and specifically in the Ampullae of Lorenzini,” Amemiya said. 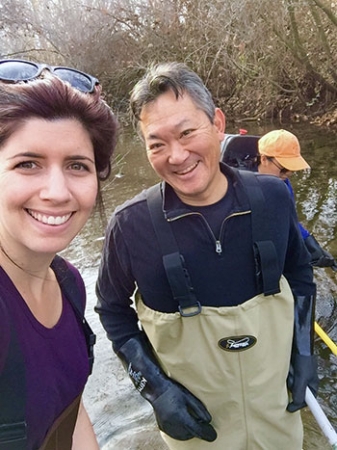 They also observed that the cells inside the organs expressed genes coding for enzymes that synthesize chitin, and that they were adjacent to the signals from fluorescent chitin probes. This demonstrated that the chitin is definitely synthesized within the AoL.

Because the findings were so unexpected, it took years of rigorous testing and diverse methods to prove that the material was chitin and not some other polysaccharide, Phillips said.

Amemiya joined the Department of Molecular and Cell Biology in the School of Natural Sciences in 2017 and Phillips, a student at the University of Washington, moved to Merced with the lab to finish her graduate degree. The bulk of their research was conducted at UC Merced.

“Through these collaborations, we observed that chitin extracted and purified from Ampullae of Lorenzini gel formed crystalline structures reminiscent of published images of chitin crystals,” Phillips explained. “These findings were another line of evidence suggesting that chitin is indeed a component of the gel.”

Although chitinous gels have never been observed in the biological world, chitin has many diverse technological uses and synthetic chitin gels are produced for use in drug-delivery systems and other applications.

There are still many unanswered questions. Chitin contributes to the rigidity of many invertebrate structures, but given its prevalence in diverse vertebrate systems, it likely serves other functions, too — what does it do in the sharks and rays?

“We observed signatures of chitin in the Ampullae of Lorenzini of diverse cartilaginous fish species, so this trait has survived hundreds of millions of years of evolution,” Phillips said. “And although we don’t understand the function of chitin in these fishes yet, we know that the polysaccharide isn’t used by all vertebrates because no mammals, reptiles or birds possess the genes necessary to make it.”

There are a lot of implications for this work in other areas of research, for example, these findings may prove relevant to the aquaculture industry.

“In some situations, chemicals that prevent chitin biosynthesis are dumped on fish farms to control pests,” Phillips said. “Now that we know chitin is synthesized by diverse aquatic vertebrates and invertebrates alike, the likely ecological impacts of these chemicals need to be studied more carefully.”