The American Society of Criminology (ASC) has elected Vice Provost and Graduate Dean and sociology Professor Marjorie Zatz as an ASC Fellow — the society’s highest honor — in recognition of her outstanding contributions to the field of criminology.

The society celebrated Zatz’s achievements during an award ceremony at its meeting earlier this month in San Francisco. 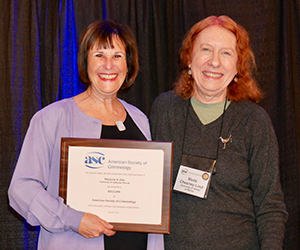 Marjorie Zatz is elected as an American Society in Criminology Fellow.

Zatz has published seven books and more than 50 articles and chapters on immigration policy; race, gender and juvenile and criminal court processing; Chicano gangs; and the Cuban and Nicaraguan legal systems.

Before moving to UC Merced in 2014, she was professor of justice studies at Arizona State University for 32 years. She held several administrative positions at ASU and served as program director for the Law and Social Sciences Program at the National Science Foundation.

The title of fellow is given to ASC members who have achieved distinction in criminology and recognizes individuals who have made a scholarly contribution to the intellectual life of the discipline, whether in the form of a singular, major piece of scholarship or cumulative scholarly contributions. Longevity alone is not enough; a fellow must have made a significant contribution to the field through the career development of other criminologists and/or through organizational activities within the society.

UC Merced is one of the top universities for promoting upward mobility, research and civic engagement at an affordable price, according Washington Monthly magazine. The campus is rated No. 56 out of...