Anne Zanzucchi has worn many different hats in her 14 years at UC Merced and now she is preparing to enter her newest role as associate dean for Student Services and Academics for the School of Social Sciences, Humanities and Arts (SSHA).

Zanzucchi, who is a teaching professor in the Global Arts, Media and Writing Studies department, has a storied past with UC Merced. She joined the university in 2005 as a lecturer in the Karen Merritt Writing Program, followed by a joint appointment to the Center for Teaching and Learning. Drawn to UC Merced for the rare opportunity to be part of a new university, Zanzucchi immersed herself in the campus from day one.

“I was mainly attracted to UC Merced because it was so unusual for a campus to be developed from the start. The notion of a brand-new university in the UC system was really exciting,” Zanzucchi said. “It was a new place, with room for growth.” 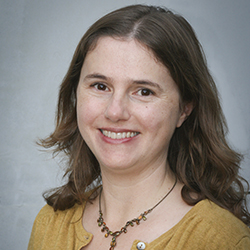 Anne Zanzucchi is the new associate dean for Student Services and Academics for the School of Social Sciences, Humanities and Arts.

Zanzucchi’s varied involvement with both students and faculty associations has prepared her for this new role. She joined the Faculty Senate in 2012 and served on the Undergraduate Council from 2013-2015, during which she coordinated the university’s review of general education while it transitioned from a school-based program to a campuswide one. She also served as the co-director of the writing program until 2016, all the while continuing her teaching duties.

Throughout her comprehensive involvement in academic planning on campus, Zanzucchi said the opportunity to interact with students and faculty from vastly different departments is one of her chief pleasures of working at UC Merced.

“UC Merced, and especially the School of Social Sciences, Humanities and Arts, is intellectually diverse. A lot of different kinds of teaching and research happens here that is specialized, community engaged and interdisciplinary. I think our campus has been distinctive in the students we’ve sought to serve and the scholarly endeavors we’ve pursued,” Zanzucchi said. “That becomes a really interesting space for faculty and staff, and it shows our commitment to scholarship, teaching and our students.”

Moving forward, Zanzucchi will continue to serve as a representative of UC Merced on the systemwide Standardized Testing Task Force. In the next academic year, Zanzucchi’s new half-time administrative appointment will still afford her time to continue her original mission at UC Merced: teaching.

A UC Merced professor's latest work has been selected for a pair of international film festivals this year. Global Arts, Media, and Writing Studies...

A UC Merced professor is collaborating with faculty from UCLA and the University of Illinois in a study that aims to find how people might best deal with...