UC Merced is leading the charge to bring free outdoor concerts to Merced.

Through Nov. 20, you can cast a vote for Merced to be named one of the Levitt AMP finalists. If Merced finishes in the Top 25, the city will move one step closer to receiving a $25,000 matching grant to present 10 free outdoor concerts as part of the 2020 Levitt AMP Music Series.

If Merced were to be chosen, Merced Open Air Theater in Applegate Park would be the host of the concerts. Applegate Park is a mile away from downtown Merced and has an amphitheater with a permanent stage, making it an ideal location for the concert series. Merced is the only city in California that has advanced to this stage of the competition.

UC Merced Arts partnered with the City of Merced to apply for the grant. Each year, the Levitt Foundation awards the matching grants to up to 15 cities in the country. 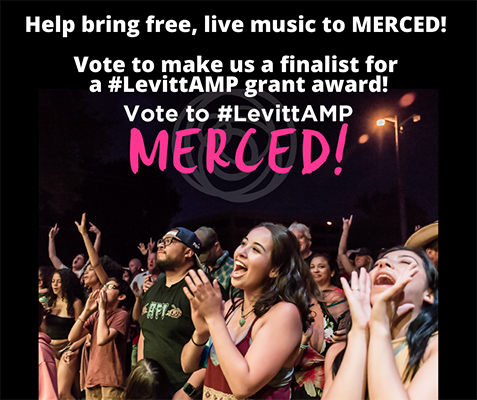 Cast a vote for Merced to be named one of the Levitt AMP finalists.
Subscribe
Submit A Story