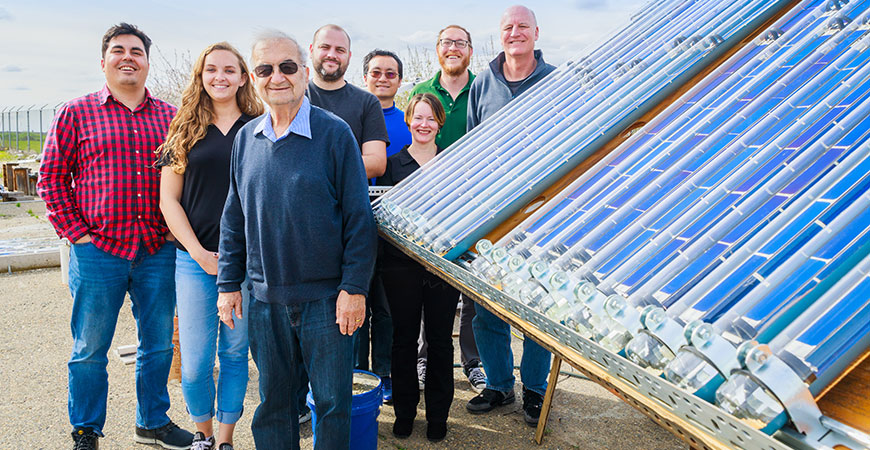 Professor Roland Winston, center, director of UC Solar, with members of his research team and a large solar collector.

Three big UC Solar projects are poised to be the next big breakthroughs in low-cost, accessible sustainable commercial and residential energy in California and far beyond.

Researchers are building working models of one project developed through a grant from the California Energy Commission for a solar unit that can provide electricity and heat to commercial and residential buildings.

“It would drive down the cost of solar for homes and other buildings because you’d only need one installation so you get both heat and power production for the same price,” said UC Merced Professor Roland Winston, director of UC Solar and member of the School of Engineering and the School of Natural Sciences. “No one else has done this.”

The team recently filed a patent application on the technology that’s based around Winston’s non-tracking solar collectors. Photovoltaic (PV) systems such as solar arrays get hot, and the team has developed a way to pull heat from the solar cells using aluminum minichannels —made cheap by the automotive industry — and have replaced the typical PV module packaging with an inexpensive non-imaging optic.

“By removing the heat from the cell, the electric component actually performs more efficiently and we get a bonus heat output from the system,” said postdoctoral researcher Bennett Widyolar, a UC Merced undergrad and graduate school alumni.

“We’re nearing the end of this project and are thinking about how to scale up to a production facility,” he said. “With this collector, we are adding more tools to the solar-energy toolkit to aid in the renewable transition.”

"This desalinates and cleans water at half the price of using natural gas to power a similar process. There would be a reduced need for natural gas, so we could clean up dirty and toxic water and reduce the number of natural-gas related accidents like the massive leak in Aliso Canyon in 2015.”

The second project, supported by a grant from the U.S. Department of Energy’s Solar Energy Office, is a portable water purification unit that harnesses solar power for 24/7 operation.

“This desalinates and cleans water at half the price of using natural gas to power a similar process,” said Project Manager Lun Jiang. “There would be a reduced need for natural gas, so we could clean up dirty and toxic water and reduce the number of natural-gas related accidents like the massive leak in Aliso Canyon in 2015.”

Wastewater can be shipped to stationary purification plants, but that’s expensive, the researchers said, and the hauling process contributes to greenhouse gas emissions. Having a portable unit allows companies and groups to take advantage of the weather to get around-the-clock work right where they are.

The team on this project, which includes UC Solar Co-Director Professor Gerardo Diaz and Professor James Palko, anticipates a full pilot-scale unit in 2021.

Each of the projects was deemed worthy of $1 million or more in grants, and at least one has already grabbed federal attention: A solar unit for commercial production that produces extremely high heat — 650 Celsius or more.

Such a unit would be used in manufacturing industry, and right now, the team is preparing for an on-site demonstration at a wallboard-production plant in California.

The unit UC Solar has designed is much smaller than a traditional solar unit would have to be to produce these temperatures, and the technology would also allow the plant to store heat and power turbines.

The researchers are in the middle of a three-year project supported by the federal Advanced Research Projects Agency–Energy, or ARPA-E, which funds the development of high-risk-high-reward advanced-energy technologies. A demonstration model was on display at the Dirksen Senate Building in Washington, D.C., last year so lawmakers could see and understand it.

The ARPA-E project partners UC Solar with Gas Technology Institute (GTI) in Des Plaines, Ill. Producing such high temperatures — nearly the heat that liquefies steel — requires specific adaptations and components including a suitable thermal fluid that comes from GTI, while the nonimaging collector comes from Merced.

The project is unique in that of about a dozen projects funded, it alone has survived several rounds of scrutiny under ARPA-E’s Full-Spectrum Optimized Conversion and Utilization of Sunlight (FOCUS) program.

“Going from a seedling project to a full-demonstration model is unprecedented, and neither of us could have done it alone,” Winston said. “No one thought you could do this and, honestly, no one else can do it. No one else knows how to design the optics for it.”

As the number of cases of COVID-19 surge again globally as a result of the delta variant, world leaders are searching for ways to make more informed...

The over the counter, “safe,” organic-compliant insecticides people purchase at home-improvement stores could be causing a problem that goes...