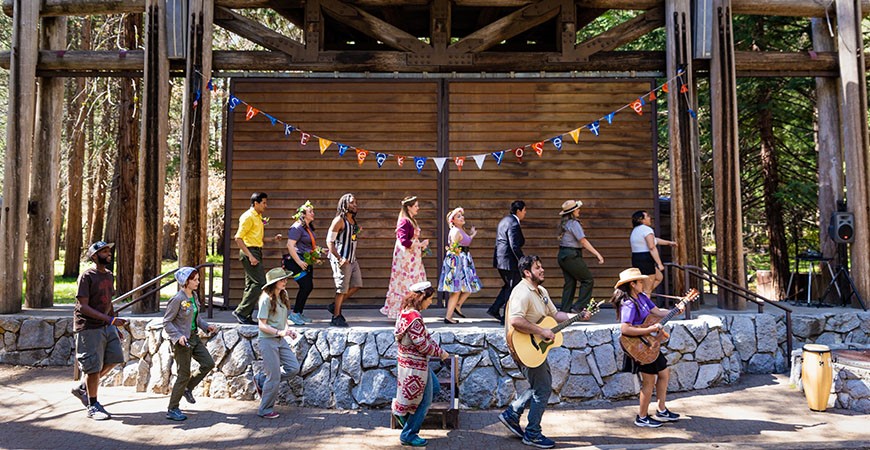 The third annual Shakespeare in Yosemite is an eco-production of 'As You Like It.'

Unlike traditional theater productions, there was no red curtain, special lighting, microphone feedback or elaborate stage makeup at Shakespeare in Yosemite.

Instead, squirrels scurried across the stone stage and among the audience members’ feet. Birds cawed in the nearby trees, as the last of the winter leaves fell between the wooden bench seats of Lower River Amphitheater near Yosemite Falls.

It really feels like you’re a world away, but that’s the goal.

The third annual production of Shakespeare in Yosemite transformed Yosemite National Park into the Forest of Arden, the focal location in Shakespeare’s famous pastoral romantic comedy “As You Like It.”

The original is a tale of love manifested in various forms as young Rosalind and Celia wander, exiled, through the forest looking for safety, help and, eventually, love. Shakespeare in Yosemite is an adaptation by UC Merced English Professor Katie Brokaw and Professor Paul Prescott of the University of Warwick, in England. Their remix of “As You Like It” juxtaposes modern costumes, Shakespearean language and a natural, wooden backdrop. In this version of the classic play, characters take on modern-day titles and roles, such as the evil Duke Frederick who is reimagined here as a company man with no interest in preserving the environment. Other characters are city dwellers who eventually make their way to the forest where they find themselves charmed by new love interests and the forest itself. 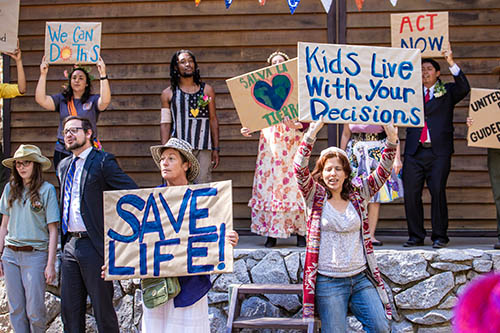 A protest scene from 'As You Like It," which was adapted to include an environmental message.

The amphitheater’s natural setting coincides perfectly with the play’s mission as an homage to the natural world and a call to action for audience members to not only appreciate Shakespeare’s works, but to preserve and steward the environment in which Shakespeare in Yosemite is performed.

“I liked the play and I liked the message because I think it’s important right now and in the future,” said Fernando Santos, a Madera South High School senior who attended the performance for students on April 26.

“We felt our message of taking care of the land really came through and we’re really proud of that. I think that artistically we just keep growing each year and that our message keeps getting stronger.”

“I liked how when the actors were talking with each other and singing they got along really well. I felt the vibe of it,” said Nallely Ramos, a fellow senior at Madera South High School.

That “vibe” is a unique one, which Brokaw said was the goal in reimagining Shakespeare as an eco-production.

“We felt our message of taking care of the land really came through and we’re really proud of that,” said Brokaw. “I think that artistically we just keep growing each year and that our message keeps getting stronger.”

The message resonated with audience members who filled out a survey and offered feedback following the performance. The response was overwhelmingly positive, Brokaw said, with many people happy to see Shakespeare used as a vehicle for saving the planet.

“There were a lot of comments saying that they were moved that it showed young people engaging with the environment,” Brokaw said. “They were glad to see that this generation is carrying forward that environmental message.”

Yosemite National Park is once again serving as the backdrop for a loose adaptation of one of Shakespeare's comedies. Shakespeare in Yosemite's...

Preparations are underway for this year's production of Shakespeare in Yosemite, and the show promises to be groovy. Working with students,...