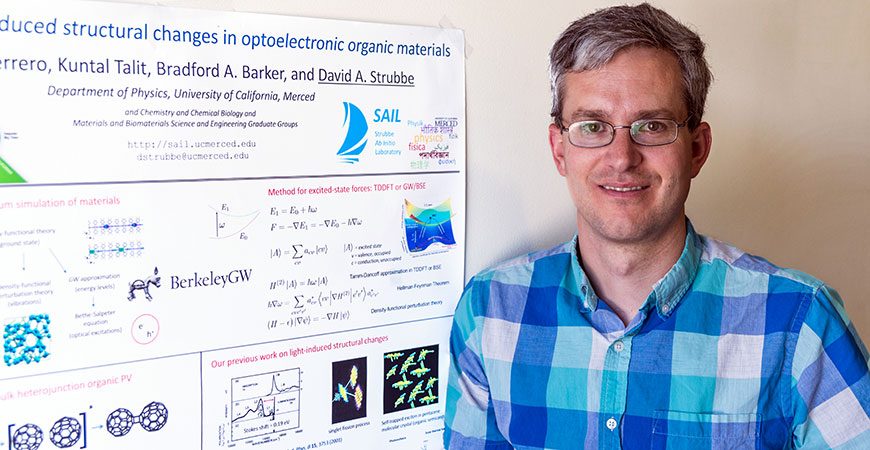 Durable, reliable, affordable solar power is the future of energy, and UC Merced computational physicist Professor David Strubbe is diving into a new area of science to answer the call.

Strubbe’s new project aims to understand why two organic materials — that are cheaper and easier to produce than the prevalent silicon-based products — don’t last as long, and explore how to improve them.

He developed a new computational method to apply a physics approach to what is really an organic materials chemistry problem — searching for answers at the atomic level to understand why buckyballs and perovskites in organic solar cells degrade in sunlight.

His project, entitled “Theory of Light-induced Structural Changes in Optoelectronic Organic Materials,” funded by a three-year, $390,000 grant from the Air Force Office of Scientific Research, will examine the structural changes in each of those materials when they absorb sunlight.

“Degradation is one of the major barriers to using these materials in wider applications,” Strubbe said. “Figuring out how the degradation happens could give us some ideas for different designs or ways to mitigate the degradation.”

Buckyballs, also called fullerenes, were one of the first nanoparticles discovered more than 30 years ago. They are made of carbon atoms linked to other carbon atoms by covalent bonds in a pattern of hexagons and pentagons, creating molecules that resemble soccer balls.

The bonds between the carbon atoms make buckyballs strong, so buckyballs are used in composites to strengthen other materials. Buckyballs are also good electron acceptors, which makes them useful as a component in solar cells for transforming sunlight into electricity.

Perovskite is a mineral that was discovered in the early 1800s, but recently a version containing organic molecules has been studied for the light-harvesting active layer in solar cells. Some researchers say perovskite cells are the fastest-advancing solar technology to date and have the potential to reach even higher efficiencies and lower production costs.

However, even more so than buckyballs, they are vulnerable to environmental influences such as moisture and oxygen, heat and light, which make them unstable.

“Rooftop solar cells now are supposed to last about 20 years,” Strubbe said. “Perovskite solar cells, as of now, are not really being used — early versions lasted only a few hours. Despite a lot of progress, perovskites are still nowhere near the stability of the standard silicon technology.”

Several UC Merced researchers, including Professor Sayantani Ghosh , are working on projects that involve perovskites as part of her research with the NASA-funded Merced nAnomaterials Center for Energy and Sensing (MACES).

“Hybrid perovskites are indeed a very interesting class of materials, and David’s perspective is an intriguing one. There is considerable effort in the field focused on altering the chemical composition and/or adding barrier layers to arrest perovskite degradation in response to ambient moisture, oxygen, etc., including in my group, as part of MACES,” Ghosh said. “But investigation of the effect of light is new — and less well understood. It could be, perhaps, even more critical given that we are trying to harness the unique properties of perovskites to design solar cells.”

Strubbe, with the Department of Physics in the School of Natural Sciences, said it is worth pursuing these materials for solar technology because of their low cost, ease of production, and high efficiency. But researchers need answers about reliability first.

The Air Force uses solar cells in satellites and in other applications, but both materials could make solar more widely interesting commercially because of their advantages. Strubbe said a variety of solar-collecting ideas could be developed if the materials can be made more stable.

“Organic materials and hybrid perovskites can enable new cheap, light-weight and flexible solar devices,” Strubbe said. “We are hopeful that a better understanding of their degradation problems will bring that vision closer.”