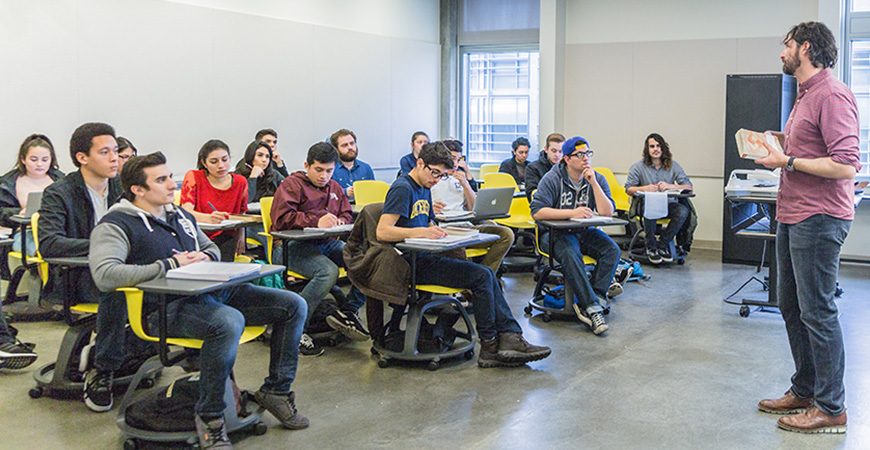 David Jennings, who teaches philosophy, is among the tenured lecturers with a new working title: teaching professor. Officials say the title more accurately reflects the work done by these faculty members.

“The thing I like about this title is that it is descriptively clear,” said Anne Zanzucchi, a teaching professor in writing who joined UC Merced when the campus opened in 2005. “It’s hard to imagine any other title that could capture that.”

The main types of faculty in the University of California system are professors and lecturers.

The L(P)SOE title is unique only to the UC to describe teaching-intensive faculty who are members of the Academic Senate, as a payroll title distinction from Unit-18 lecturers who are on contracts and union-represented. In part, the new label highlights the comprehensive expertise of teaching professors while also helping to clearly communicate their role to the campus community and beyond.

David Jennings, a teaching professor in philosophy and co-chairman of the consortium that advocated for the change, said many people simply didn’t understand the old title.

“Having the teaching professor title is much more informative for faculty, students, parents – anybody who is trying to understand what we do,” he said.

For example, the new title offers more clarity for anyone reading a grant proposal or a student’s letter of recommendation, both Zanzucchi and Jennings said.

Zanzucchi said it could be a barrier when a grant funder was uncertain what L(P)SOE meant and in effect if qualified to seek funding. The teaching professor title there -- and on a student letter of recommendation – helps head off that kind of confusion.

The re-titling is also consistent with the recent revision of the series academic personnel description, which notes new considerations for the title for this expanding faculty line. That revision adds rank and step, sabbatical privileges, and professional achievement expectations, all of which underscore a new alignment with the professor series.

In addition, teaching professors may take on responsibilities such as mentoring peers or supervising graduate students, she said. Those are examples of the work that goes well beyond the lab or lecture hall.

“There is a tendency to think that teaching is walking in and out of the classroom,” Zanzucchi said. “It is so much more than that.”

While the emphasis of the faculty group is teaching, many teaching professors also are engaged in research, pedagogy, curriculum development and other professional activities. Jennings said teaching professors are an integral part of the university and its shared governance as members of the Academic Senate – something the new title helps recognize.

Many people worked on the proposal to make the switch to promote both clarity of responsibilities as well as a more equitable and inclusive recognition of this faculty line. Teenie Matlock, vice provost for the faculty, was an especially important contributor to the initiative, Jennings said.

He has used the teaching professor title for several months and believes it is simply better understood. “And that’s pretty important for a title,” Jennings added.