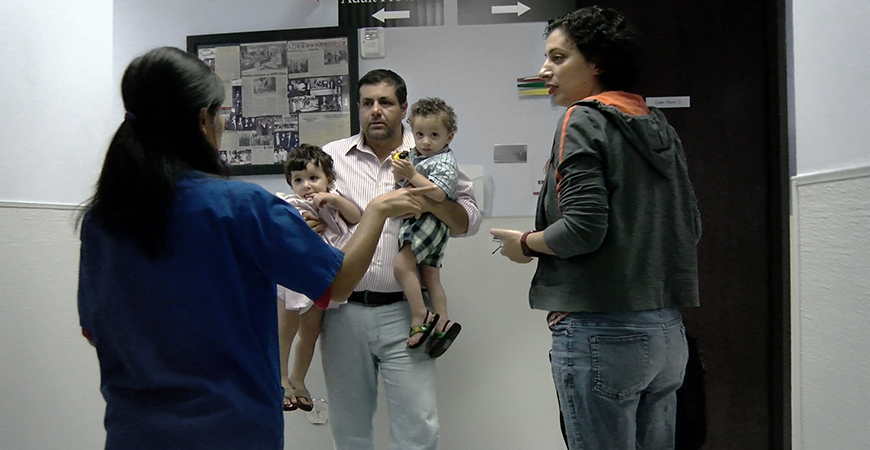 A clip from a film produced by new Global Arts Studies Program Professor Yehuda Sharim. The film is part of the 13th annual Human Rights Film Series at UC Merced.

Sharim’s films “We Are In It” and “Seeds of All Things” will be shown Thursday, Feb. 21, and Friday, Feb. 22. The films will wrap up the annual showcase, which features a new film every Friday during February.

Sharim — whose focus is film and media within the Global Arts, Media and Writing Studies (GAMWS) interdisciplinary unit — worked with producer Yan Digilov to produce these films, which concentrate on the lives of migrant groups living in Houston. The opportunity to share the films with the Merced community — Sharim joined UC Merced last summer — has special significance to Sharim.

"Film and art are crucial for us to begin imagining a space where we better treat one another humanely,” Sharim said. “These films allow us to engage the personal, the intimate, and the unspoken stories implicit in border-crossing and thus face one another and recognize our shared challenges. In thinking about UC Merced, we face a similar challenge. We are here to imagine and build a university that is an integral part of its larger community, where we are all actively engaged in claiming justice and shaping our futures together.

“Part of healing is recognizing our wounds, and film offers us that meeting space."

“We Are In It” chronicles the stories and journeys of five Houston residents and their attempt to find refuge in the city. The film documents their personal archives — poetry and paintings of Baghdad, film clips of the Burmese diaspora songs in Swahili — and their efforts to re-imagine a home amidst experiences of trivialized war, hardship and alienation. By combining tales of deportation with everyday defeats and resilience, it identifies what lies beneath the surface of migrant and refugee realities and the unsettling need to move toward political and economic security.

“Seeds of All Things” looks at the experiences of migrant communities moving through a health clinic in southwest Houston just days before the 2016 election. The area is home to the highest concentration of immigrant communities from Asia, Africa, the Middle East and Central America, and HOPE Clinic serves as a haven for newcomers in need of spiritual, emotional and physical healing. The clinic is staffed almost entirely by migrants and led by powerful, compassionate women who try to build a culture of care amid the extreme bureaucracy of the American healthcare systems.

The purpose of the Human Rights Film Series is to bring home the discussion about human rights, and to view film as an art form that can create change at the local and global levels in the effort to end violence and inequality.

“In addition to sharing prize-winning documentaries that explore a range of important topics — such as the experience of refugees and immigrants, the planet’s sustainability, and domestic violence — we engage the community in conversation about human rights issues and their local relevance,” UC Merced anthropology Professor Robin DeLugan said.

The School of Social Sciences, Humanities and Arts, the Interdisciplinary Humanities graduate group, the History and Critical Race and Ethnic Studies departments, the Center for the Humanities and GAMWS worked together to bring the films to UC Merced.

The films will be shown in COB 105 and are free and open to the public. Doors open at 6:30 p.m. with showings starting at 7 p.m. A panel Q&A featuring members of the cast will be held following the screenings. The film “A Better Man” will screen on Friday, Feb. 15.