Chancellor Leland Recognized as Woman of the Year 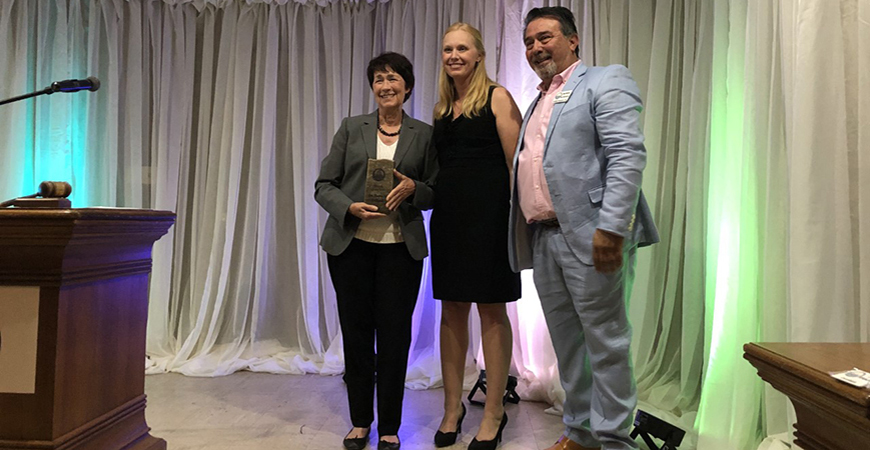 Chancellor Dorothy Leland was recognized as the Merced Chamber of Commerce's Woman of the Year earlier this month. The chamber noted Leland's impact on the Merced community as a reason for the honor.

The Merced Chamber of Commerce has named Chancellor Dorothy Leland their 2019 Woman of the Year.

Leland was honored at a ceremony earlier this month. The chamber credited Leland’s leadership of the university for not only helping to expand the youngest campus in the UC system, but for making an impact on the city of Merced as well.

After becoming the university’s third chancellor in 2011, Leland quickly began working on ways to help UC Merced keep up with the unique challenge of being the country’s fastest-growing public university with extreme financial constraints. In 2016, Leland’s efforts led to the university breaking ground for the Merced 2020 Project — a $1.3 billion public-private partnership that will double the size of the campus by adding classrooms, labs, residential housing, a dining pavilion and athletic facilities. The public-private partnership engineered by Leland is rare for higher education institutions, and the early success of the project will likely encourage other universities to explore the possibility.

“It is truly an honor to be recognized as Woman of the Year, and I am thankful to everyone from the Merced Chamber of Commerce and City of Merced who have made my time as chancellor a successful one,” Leland said. “Without the support of the city’s business and civic leaders, it would be nearly impossible to have produced the growth that UC Merced has experienced over the past several years.”

The chamber noted that Leland’s work at UC Merced has also made an lasting mark on the city of Merced. The Downtown Campus Center — which opened in 2018 — has helped revitalize downtown Merced. Historic venues — Tioga Hotel, El Capitan Hotel and the Mainzer Theater —are under renovation. The Milken Institute ranked Merced No. 38 for best-performing large cities in 2018 — rising 56 spots from 2017 — and credited the strong job growth driven by UC Merced as the reason for the jump, which was the highest of any city.

“When Chancellor Leland came to UC Merced, she saw its potential and the potential of the students here in the Valley,” 2018 Woman of the Year recipient Mary-Michal Rawling said at the event. “UC Merced’s growth under Chancellor’s leadership has also made an indelible mark on our city and business community. The mark she’s made on Merced will endure.”