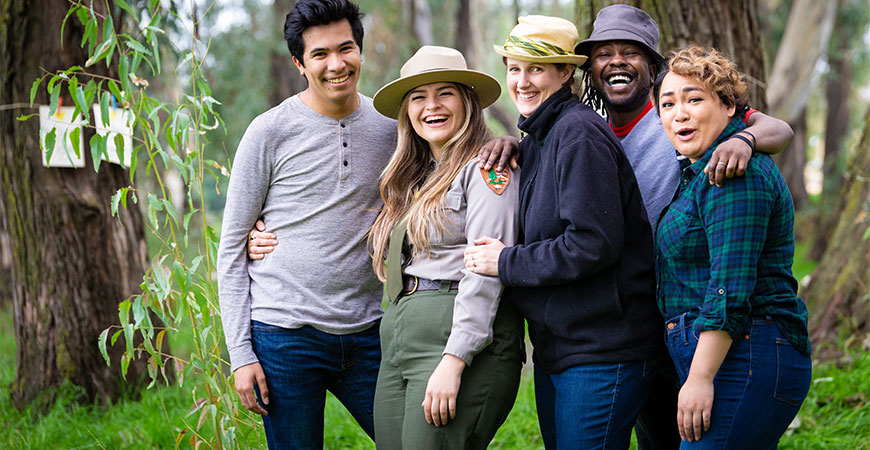 William Shakespeare’s plays are meant to be enjoyed by a live, theater audience and there is no better place to experience The Bard than Yosemite National Park.

For the third year, UC Merced is bringing Shakespeare’s wit and wisdom to audiences in a natural setting, similar to the forest that inspired the playwright’s own writings. Yosemite National Park will be transformed into the Forest of Arden where students, faculty, park rangers and community members will perform “As You Like It” -- one of Shakespeare’s pastoral comedies -- with a twist.

Shakespeare in Yosemite takes place in late April to coincide with Earth Day, which is also believed to be Shakespeare’s birthday. In keeping with UC Merced’s mission of protecting the environment, the Shakespeare scholars who adapt the play incorporate environmental teachings. This year’s focus is on the long-term effects of human life on nature and the play highlights UC Merced scientists’ research on climate change and wildfires.

The play has been adapted by English Professor Katherine Steele Brokaw of UC Merced and Professor Paul Prescott of the University of Warwick, in England.

“We love the idea that people are coming to see new possibilities for Shakespeare they didn’t know could be performed by a cast of mainly women, people of color, and young people,” said Brokaw. “Our goal is also to talk about the environmental and ecological messages for Earth Day and we find Shakespeare is a great vehicle for that.”

In “As You Like It” characters take on modern day titles and roles, such as the evil Duke Frederick who is reimagined as a company man with no interest in preserving the environment. Other characters are city dwellers who eventually make their way to the forest where they find themselves charmed by new love interests and the forest itself. 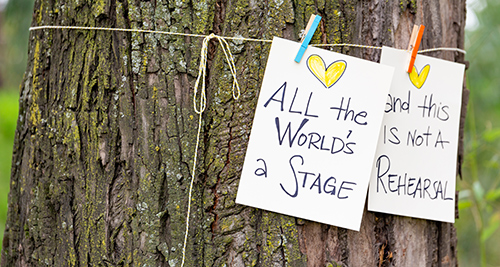 Set scenery for "As You Like It," Shakespeare in Yosemite's 2019 production.

The production includes a special performance by Lisa Wolpe, an established Shakespearean actress who appeared as Puck in last year’s performance of “A Midsummer Night’s Dream.” The play, which includes a musical component, will also feature The Sonnet Man for the second year in a row. His take on Shakespeare includes performing a sonnet set to rap music and what Brokaw calls a “hip-hop environmental piece” during the 90-minute play.

“I think ‘As You Like It’, the way we’re performing it, is making it really relevant and clever,” said Maria Nguyen-Cruz, a third-year English student who is participating in the play. “I know that a lot of pro-environment content can sound gloomy and preachy, but this show wants you to think and reflect as much as it wants you to laugh and sing.”

The cast is composed of a record number of UC Merced students, including Angel Nunez, a third-year global arts studies major, who was encouraged to audition by UC Merced lecturer and theater staple Jennifer Samuelson. Originally from Los Angeles, Nunez participated in acting workshops when he was younger, but had yet to merge his academic and extracurricular interests.

“Personally, I feel like participating in this production has added a lot to my experience here at the university, especially because I didn’t really get involved in anything before this,” said Nunez, who is now also rehearsing for Playhouse Merced’s production of "Othello". “I used to be more focused on the academics part of school, so I feel like this is enriching my experience moving forward.”

“I think ‘As You Like It’, the way we’re performing it, is making it really relevant and clever. I know that a lot of pro-environment content can sound gloomy and preachy, but this show wants you to think and reflect as much as it wants you to laugh and sing.”

Brokaw attributes the production’s growth among students to the development of the global arts studies and English programs at UC Merced, along with the event being in its third year. Although the plays being performed may change annually, Brokaw said the goal always remains the same: to provide a fun, but thoughtful experience for Yosemite visitors.

UC Merced’s performances of “As You Like It” in Yosemite National Park are free and open to the public from April 26-28, 2019. Find the complete schedule and other details, including transportation options online.

Yosemite National Park is once again serving as the backdrop for a loose adaptation of one of Shakespeare's comedies. Shakespeare in Yosemite's...

Preparations are underway for this year's production of Shakespeare in Yosemite, and the show promises to be groovy. Working with students,...