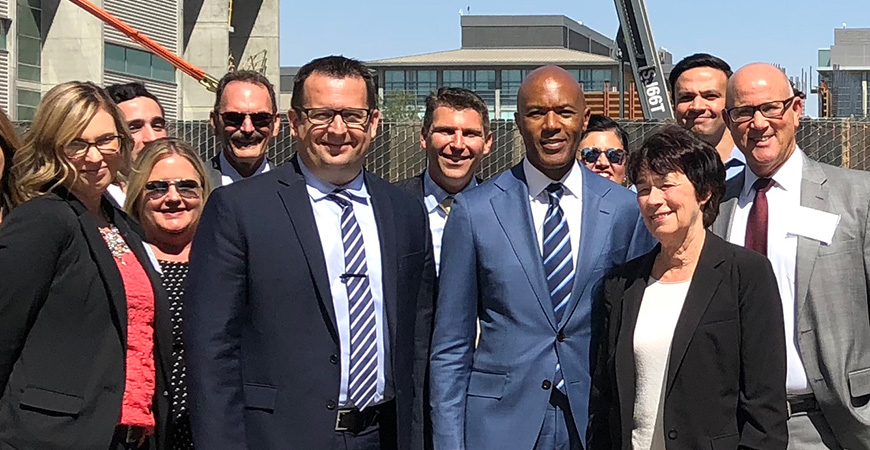 UC Merced Chancellor Dorothy Leland and Merced Mayor Mike Murphy welcomed the Bay Area Council to Merced on Thursday for a robust discussion on potential future connections between Merced and the Bay Area.

“Today we are focusing on the economic potential of building greater interconnectedness, which would have major benefits to both regions,” Leland said. “It’s not just about creating a bedroom community here. We will be attracting businesses and industries that will help lift Merced, the Valley and the state.”

The event began at UC Merced’s Downtown Campus Center, where Bay Area Council President Jim Wunderman and nearly 50 business, nonprofit, government and education leaders from the two regions were provided with a brief history of UC Merced and the impact its success has had in expanding its reach on campus and downtown. Attendees included Assemblymember Adam Gray, Merced College Superintendent and President Chris Vitelli and representatives from the office of Senator Diane Feinstein and Merced County were among the attendees.

Murphy pointed to the renaissance of historic venues like Tioga Hotel, El Capitan Hotel and the Mainzer Theater as a representation of the effect UC Merced’s growth and the recent addition of the Downtown Campus Center have had in the area.

“This has been a fantastic thing for us,” Murphy said. “We’ve had a real public interest with UC Merced, and there has been an increase in private interest because of it.”

Wunderman discussed Merced’s role in the proposed Northern California “Megaregion,” which would connect the Central Valley to the Bay Area and Silicon Valley. In all, 21 counties would be grouped into four regions: Bay Area, Sacramento Area, Northern San Joaquin Valley and Monterey Bay Area. The megaregion would possess one of the fastest-growing economies in the nation and allow for more interconnectivity and innovation.

It’s not just about creating a bedroom community here. We will be attracting businesses and industries that will help lift Merced, the Valley and the state.

“When you look at the Central Valley and the Bay Area, you think of separate places that are far away,” Wunderman said. “Once that transportation connection is complete, the game is going to change.”

Wunderman cited Merced as a potential hub because of its proximity to where the proposed high-speed rail line would connect from north and south to the Bay Area.

The discussion shifted to the Merced 2020 Project, which was celebrated as a crown jewel of California’s public-private partnerships (P3). Dan Feitelberg, principal at KPMG and former vice chancellor for planning and budget at UC Merced, discussed the university’s reasoning behind bridging the gap between the public and private sectors to create facilities that fulfill UC Merced’s mission and expand its reach.

“We were able to develop projects that the university will be able to maintain in an accelerated timeline we could manage,” Feitelberg said. “I believe the investments being made today continue to bridge the gap between the Central Valley and the Bay Area.”

Sean Randolph, senior director of the Bay Area Council Economic Institute, said P3 partnerships could help alleviate the mounting pressure the state is facing regarding building projects. Randolph said California will be facing a massive deficit in the coming decades due to deferred maintenance and new capital projects. The model UC Merced put in to action could cut into that deficit.

The Bay Area Council and other visitors completed their visit with a tour of UC Merced, including the buildings and construction from the Merced 2020 Project.