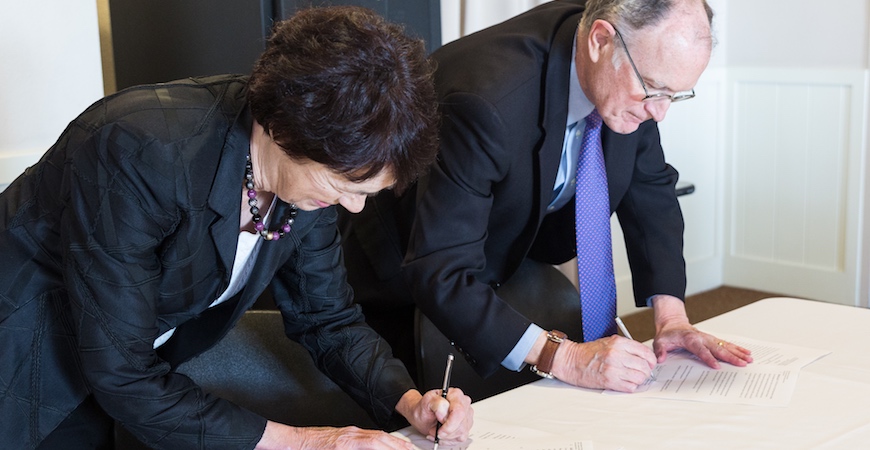 At a ceremony held earlier today, UC Merced Chancellor Dorothy Leland and Lawrence Berkeley National Laboratory Director Michael Witherell signed a memorandum of understanding (MOU) to establish a formal partnership between the two organizations. The agreement sets terms for the appointment of joint faculty and the sharing of resources.

“This agreement formalizes and brings structure to what has already been a fruitful relationship between UC Merced and Berkeley Lab,” UC Merced Chancellor Dorothy Leland said. “When we combine our complementary strengths and our unique resources, there will be no limit to what we can achieve.”

The agreement is the first of its kind for UC Merced. Though the university has de facto working relationships with multiple Department of Energy National Laboratories, including research collaborations with Berkeley Lab and adjunct faculty at Lawrence Livermore National Lab, the MOU represents the first official partnership between UC Merced and a national lab.

“This MOU formalizes Berkeley Lab and UC Merced’s commitment to build on existing relationships, and to look to the future in possibly creating joint programs between the two institutions to solve research questions in new and unique ways,” said Witherell.

The MOU will facilitate formal split appointments between UC Merced and Berkeley Lab, according to UC Merced Vice Chancellor for Research Sam Traina. Faculty employed under the terms of the agreement will receive official positions at both institutions. Recruitment, appraisal and tenure decisions will be made jointly. Startup costs and salaries will also be split evenly. 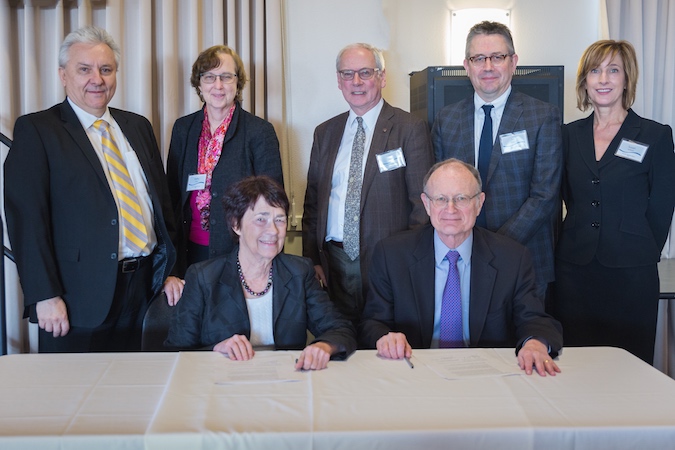 By enabling the appointment of joint faculty, the MOU will improve collaborative ties between the two institutions’ scientists and provide a new way in which UC Merced students can contribute to Berkeley Lab research. The MOU will also facilitate access to both institutions’ resources, including Berkeley Lab’s world-class science facilities.

“As a National Lab managed by the University of California, it is important for Berkeley Lab to demonstrate the value of its close relationship with UC. I have been working on establishing this partnership with Sam Traina for several years and I am very happy that we now have another UC campus as a partner for Berkeley Lab for joint faculty appointments,” said Berkeley Lab Deputy Director Horst Simon.

Even before the MOU was signed, collaboration between the two institutes had already resulted in major scientific advances. For example, the discovery of the first neutron star collision was made possible by the combined efforts of research teams led by UC Merced computer science Professor Florin Rusu and Berkeley Lab’s Peter Nugent.

According to Traina, the goal of the MOU is to facilitate collaborations that catalyze further breakthroughs of this magnitude, especially in areas where UC Merced and Berkeley Lab possess complementary resources.

“The MOU Increases the likelihood of fruitful collaboration between UC Merced and Berkeley Lab, especially in the areas of energy, sustainability, computation and genomics, fields that are major priorities for both organizations,” Traina said.

The MOU will also help boost UC Merced’s reputation as a hub for cutting edge research.