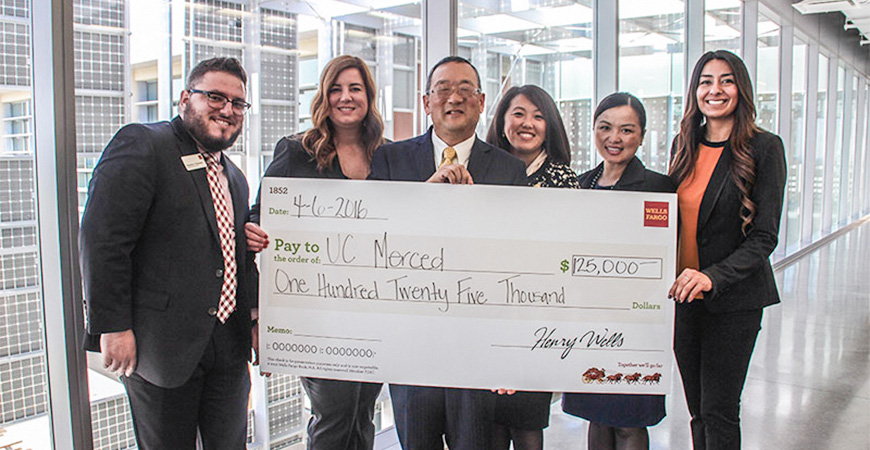 Wells Fargo has been a longtime supporter of UC Merced, donating nearly $2 million since its founding.

UC Merced is distinguished by its trailblazing ethos, and the university has pushed the boundaries of innovation in ways that impact both the campus and the wider community. This is due in large part to the philanthropic support it receives from sponsors like Wells Fargo, which shares UC Merced’s pioneering spirit.

One of the ways Wells Fargo does this is through its support of Innovate to Grow — I2G in the campus vernacular — the School of Engineering’s showcase for senior capstone projects and student engineering ingenuity.

“Wells Fargo has been giving to the School of Engineering for many years, focused particularly on our Innovate to Grow event,” Director of Development Gigi Marr-Mitchell said.

While virtually all engineering schools require their students to complete capstone projects before graduating, UC Merced’s engineering capstones result in the creation of new technologies that directly impact local businesses while simultaneously exposing students to engineering challenges they might not encounter in the classroom.

“Every engineering school has a capstone program that’s required for accreditation,” said Stefano Foresti, director of innovation for the School of Engineering. “At UC Merced, we team our students with external partners to give students a real-world experience that most schools don’t. The I2G capstone remains an important part of our student experience because it’s the closest many get to an internship.” 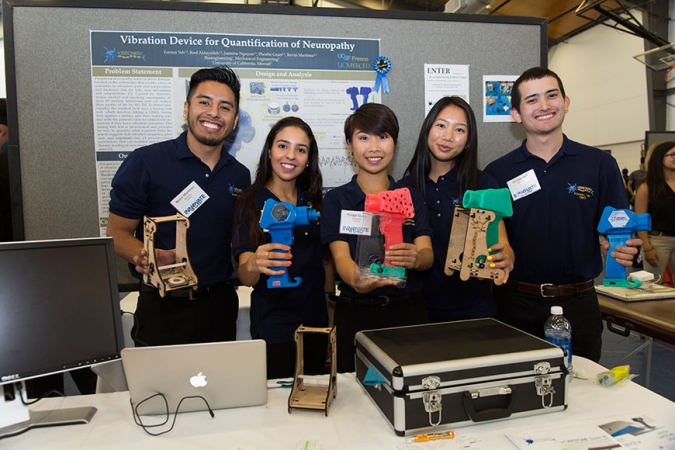 Innovate to Grow showcases the hard work of graduating seniors in the School of Engineering.

Graduating seniors in the School of Engineering assemble into teams of peers and faculty mentors who partner with local businesses and nonprofits to solve pressing or persistent engineering challenges. As part of the most recent I2G, for example, one team of students partnered with Bowles Farming Company in Los Banos to produce an irrigation system that reduces the time and labor needed to move sprinkler pipes in agricultural settings. Another partnered with E&J Gallo in Modesto to help the winery develop technologies to reclaim wastewater.

I2G owes much of its current success to the support of Wells Fargo.

“Wells Fargo is really responsible for the iteration of the event we see today,” Foresti said. “Wells came the second year of I2G, and they’ve helped it become the signature day for the School of Engineering and a major showcase for UC Merced.”

Wells Fargo has also been instrumental in I2G’s recent expansion into the fall semester. With this year’s $50,000 gift to the School of Engineering, Wells Fargo helped turn what was once a spring-only event into a biannual showcase that takes place at the end of both the fall and spring semesters. This year's event is happening Dec. 15.

But Wells Fargo’s involvement with UC Merced isn’t new. They’ve helped promote UC Merced’s vision for education and economic development in the San Joaquin Valley for quite some time. This year’s gift in support of I2G’s fall expansion is just one of many that Wells Fargo has provided in support of the university. Over the past three years, Well Fargo has committed over $300,000 to the School of Engineering and I2G. They’ve also sent local representatives to I2G to serve as competition judges.

Wells Fargo is really responsible for the iteration of (Innovate to Grow) we see today. ... They’ve helped it become the signature day for the School of Engineering and a major showcase for UC Merced.

Long before ground broke at the site where the campus now stands, Wells Fargo was a staunch supporter of the fledgling university.

And Wells Fargo employees have been instrumental in guiding the university since its founding. Retired Executive Vice President Joanne Bertges was a trustee on the UC Merced Foundation Board from its founding until she stepped down in 2013. Since that time, Senior Vice President and Senior Director of Sales Kevin Sweeney has served as a board trustee.

Through gifts large and small, Wells Fargo has contributed nearly $2 million to the university since its founding. And it’s a partnership very much appreciated by the UC Merced community.

“Wells Fargo was one of the first sponsors of UC Merced,” Mendenhall said. “I am grateful, and I believe the whole campus feels grateful, to Wells Fargo for their support.”