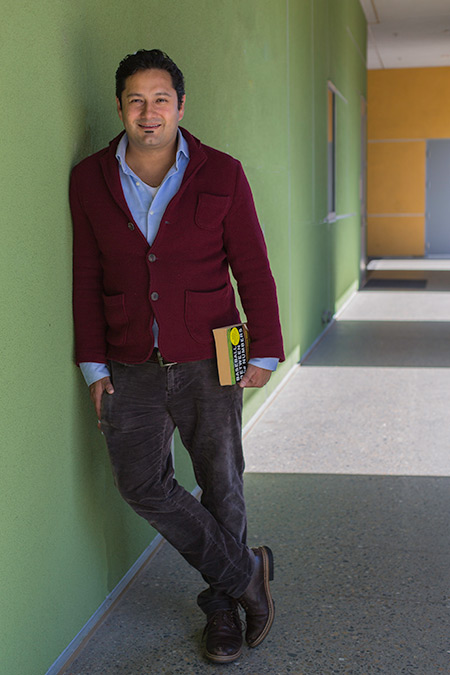 Rather than a brain-drain, the 13-country European Union (EU) expansion initiated more than a decade ago triggered a brain-reconfiguration — the rising circulation of knowledge through the increased mobility of highly skilled workers in high-demand fields.

UC Merced Professor Alexander M. Petersen and his colleague Michelangelo Puliga with the IMT Lucca School for Advanced Studies in Lucca, Italy, used the 2004 EU expansion — and its implicit guarantee of free movement of labor — as a basis to study the effects of the expanding high-skilled labor markets on European integration.

Petersen and Puliga’s new paper, featured on the cover of the April issue of the Journal of the Royal Society Interface, shows how the EU expansion facilitated the inter-European circulation of people in the medical, technical, educational, scientific, engineering and business and legal communities.

One factor facilitating the growth of the high-skilled labor markets is the EU’s policy of converging standards. Think of it as reciprocity between American states, where some achievements in one state — such as passing the bar in California — mean the achiever can practice his or her trade in some other states without retaking tests or re-earning degrees.

By developing data-driven models to explore the structural dynamics of the labor-mobility networks, the researchers provide quantitative insight into the process and outcomes of highly skilled migration.

While most workers are going from east to west, as was traditionally true, Petersen and Puliga also uncovered an emerging reverse migration channel moving west to east.

“This is important for science and other knowledge-based domains that rely on the free mobility of knowledge,” Petersen said. “Also, when people move, they don’t just take their knowledge and skills, they build social mini-bridges. When you add those mini-bridges together, they create substantial bridges between cultures and knowledge. What we observed in our study is a good sign of circulation, and thus integration, which wasn’t really visible before.”

Expanding circulation suggests the increased potential for international collaboration, which in science can lead to huge advances and breakthroughs. That could further contribute to the competitiveness of the collective science systems.

However, in a companion paper published in the April 12 issue of Science Advances, Petersen and colleagues demonstrate the negative effects of brain-drain on the cross-border collaboration rate in Europe. Quite unexpectedly, the researchers show that European cross-border integration would have been higher had the Eastern European countries not joined the EU.

The EU incentivizes migration and collaboration, and the member countries have spent a lot of time and effort on trying to integrate research.

“However, sadly, when people move around, the bridges they’ve built will dissolve if they are not actively maintained,” Petersen said.

Another huge change the researchers began to consider but will have to factor in later in more detail is Brexit — Great Britain’s imminent divorce from the EU — the legal proceedings of which began at the end of March.

“There are a lot of ramifications, even with a ‘soft’ Brexit,” Petersen said. The change in mobility could have a downside for the United Kingdom, which is a dominant immigration hub toward which high-skilled laborers have long gravitated.

“Nevertheless, while it might not be great for the U.K. and some secondary countries, the prospects for labor mobility and competitiveness in the rest of Europe may become more egalitarian,” Petersen said.

For example, the EU pools research money from its member countries and distributes it, and the U.K., being such a powerhouse, likely got more than its share, he said. What will happen to British scientific research when the country has to pay its own way is still unknown.

“This could be a really good time for rethinking and retooling programs for the EU,” Petersen said. “It’s a good time to take advantage of what we can learn from past experiences — both personal and collective.”

A computational social scientist, Petersen is a member of the Ernest and Julio Gallo Management Program, housed in the School of Engineering. Before joining UC Merced in 2016, he was an expat scientist in Italy.

The outcome of his interdisciplinary collaboration at the IMT Lucca speaks to the possibility and potential fostered by international mobility.