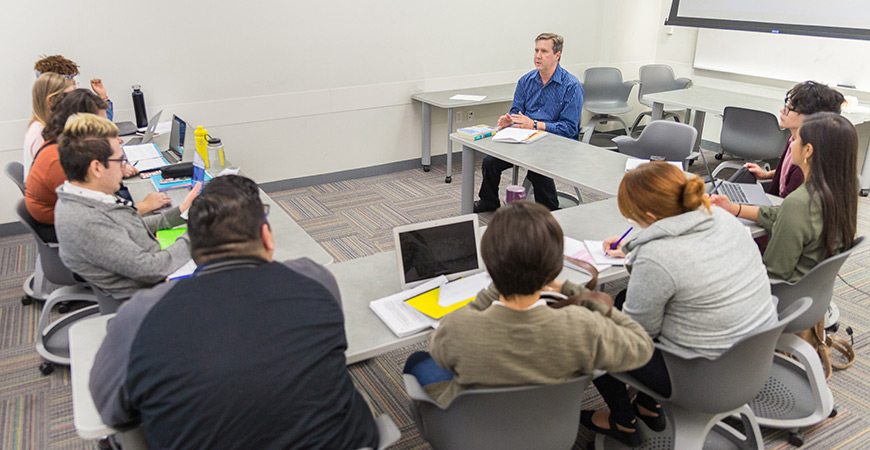 “The unit is already making contributions to the national distinction of UC Merced, based on the excellence of its faculty. On a per capita basis, the faculty members in the Sociology unit at UC Merced are at least as strong as the faculty in most, if not all, other UCs,” an external reviewer wrote in a 2017 report prepared for the seven-year program review. “At this time, very early in the development of their unit, it is clear that the faculty have attained national distinction in the area of social inequality, and are developing distinction in the other areas.”

It’s a remarkable achievement to reach parity with sociology departments on sister campuses in such a short time, given that they are largely ranked in the top 30 in the nation, with two campuses in the top 10. The sociology program (as a standalone department) only began in 2013 and the graduate program in 2015, unit Chair and sociology Professor Paul Almeida said.

Dozens of books, scholarly papers, and grants and fellowships by faculty members have received national and international recognition and published in the most esteemed outlets. While this is expected for any UC academic department, the award-winning research at UC Merced is based on topics of vital importance to the region and nation. This includes the areas of gang recovery, mass deportations, racism, gender discrimination, access to public and higher education, and the conditions under which collective political empowerment is achieved.

“We study many different topics, but from a perspective of concern for social change and reducing systematic inequality, discrimination and oppression,” Almeida said. “We look at topics that have special significance to UC Merced’s students, the Central Valley and the country in general, focusing on racism, immigration, education, gender and political empowerment.” 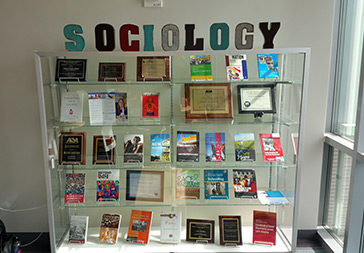 A display case in the Classroom and Office Building 2 shows off many of the books sociology professors have written and awards they have won.

The sociology unit’s focus links it tightly to UC Merced’s goal of being of service to the San Joaquin Valley, both as an educational destination for students who might otherwise not have been able to go to a university, and as a research institution that is working to deliver solutions to the most pressing problems facing the region, including immigration reform, social exclusion and political empowerment of marginalized communities.

“UC Merced has always focused on inequality — in part that’s why we are here in Merced,” Professor Irenee Beattie said. “There is so much inequality here, and our discipline has a lot of insight to offer.”

Take, for example, recent news stories about Professor Whitney Pirtle’s collaborative research into health outcomes for young people who experience the relief of legal immigration status. Even the temporary safety of a Deferred Action for Childhood Arrival (DACA) designation reduces stress and its ancillary effects.

“Our students are engaged in studying important, pressing social problems, and are also engaged in praxis (the practical application of a theory),” Pirtle said. “One of our department strengths is in the study of social movements; thus, sociology in action.”

Or consider the prolific authorship of Professor Tanya Golash-Boza, whose fifth book, “Deported: Immigrant Policing, Disposable Labor and Global Capitalism,” has made her one of the media’s go-to experts on the political economics of immigration.

She explores why there is more deportation now and how deportation connects to other systems of oppression, as well as links to incarceration.

“We work hard to make sure the students will be interested in the topics we present because they are relevant here, but we are also becoming nationally known for the work we do,” Golash-Boza said. “I feel like we’ve been really smart about how we’ve built this program. We’ve done it in a way that resonates with the students.” This includes the addition over the past two years of new professors Charlie Eaton and Sharla Alegria. 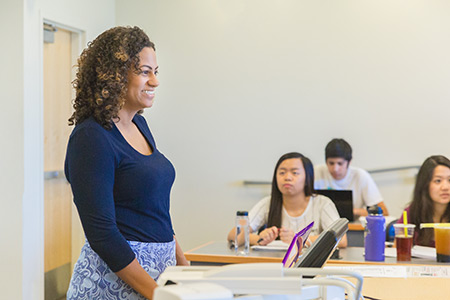 The sociology faculty members agreed they joined UC Merced because of the opportunity to help build a new campus and because they specifically wanted to work with this university’s student population.

“Our students understand inequality because they’ve lived it,” Professor Nella Van Dyke said. “Working with the students is what keeps a lot of us here. It’s very rewarding, training future leaders.”

The unit has grown in a deliberate way, with a focus on in-depth of training for undergraduates and graduate students. They are taught from their first semesters in the program how to write for academic publications and are given opportunities for research and internships. Master’s thesis topics have included mass violence; the relationship between racism-related stress and health and native healing rituals; farm labor organization; social services and immigrant community mobilization; the influence of the ADHD label on teacher expectations; the Equal Rights Amendment; siblings and college success; and many others.

In just three years as a full-fledged graduate program, 18 master’s degrees have been conferred in sociology, and students have already been placed in high-level jobs. That includes alumnus Marcus Shaw, who recently started a tenure-track faculty position at California State University, Fresno, and Juanita Garcia, a student mentored by Professor Zulema Valdez, who just started her tenure-track position in sociology at UC Riverside.

One of the 18 master’s theses, by Hyunsu Oh, won the 2017 Best Graduate Student Paper Award from the Pacific Sociological Association. Sociology undergraduates have gone on to advanced degree programs at UC Berkeley, the University of Southern California and the University of North Carolina, and into careers including community-based and social services organizations. The department plans to place dozens more students in community-based organizations and nonprofit social services in the next few years.

The faculty members all share a sense of accomplishment, not only because of the student and research success, but because of their increasing recognition and their place as part of UC Merced’s overall goals.

“UC Merced has developed world-class faculty all across the campus,” Van Dyke said. “I am really proud of what we’ve built and to be here.”