By Jason Alvarez. University Communications
May 4, 2017

The works of Shakespeare, perhaps more so than any in the western canon, have been subject to reinterpretation and reappraisal by generations of artists, scholars and laypeople.

Some, like Verdi’s opera “Otello,” are considered masterpieces in their own right. Others, most notably Thomas Bowdler’s much maligned, puritanical expurgation of Shakespeare’s works, have been roundly scorned and derided.

“Shakespeare in Yosemite,” performed on Earth Day weekend in the national park, has taken an altogether novel approach. Written, directed and produced by Shakespeare experts Katherine Steele Brokaw of UC Merced and Paul Prescott of the University of Warwick, the production recasts the Bard as “Shakespeare the Naturalist.”

Weaving together Shakespeare’s more sylvan passages with writings of the eminent American naturalist John Muir, and using Yosemite’s majestic wilderness as the backdrop, audiences were compelled to reimagine Shakespeare as a playwright deeply attuned to the drama of nature.

Coinciding with Muir’s birthday (April 21), Earth Day (April 22) and Shakespeare’s birthday (April 23), the play was enthusiastically received by audiences, with more than 600 visitors to Yosemite attending four performances over two days. The audiences included many members of the UC Merced community.

“It was exciting to learn that Shakespeare is inspired by and in nature,” said Manuel Baez Jr., an undergraduate student. “I found a new perspective on Shakespeare’s works and how nature plays an active role in the action.” 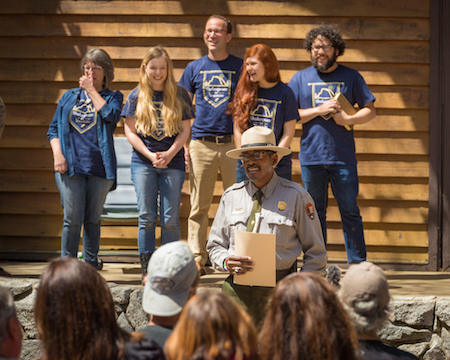 The 13-player company — which included students from UC Merced and University of the Pacific, along with other actors from the community — was minimalistically attired, wearing blue T-shirts with the “Shakespeare in Yosemite” logo on the front and a passage from Shakespeare’s “Troilus and Cressida” on the back: “One touch of nature makes the whole world kin.” The passage is frequently misattributed to Muir, who famously quoted it in his book “Our National Parks.”

Indeed, some passages from Shakespeare even seem to advocate for the staging choices made in “Shakespeare in Yosemite.” The third act of Shakespeare’s “Henry VIII” opens with a despondent Queen Katherine asking her servant to sing her a song to disperse her sorrows. The servant, lute in hand, begins:

Orpheus with his lute made trees,
And the mountain tops that freeze,
Bow themselves when he did sing
To his music plants and flowers
Ever sprung; as sun and showers
There had made a lasting spring. 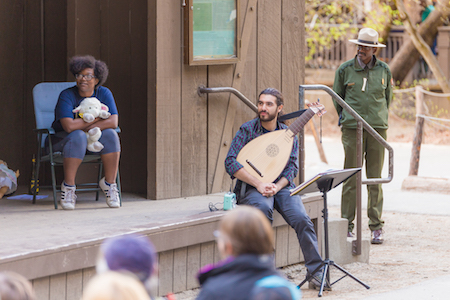 More than mere entertainment, the play’s themes were meant to subtly provoke. Given California’s recent drought, widespread concern about climate change, and anxiety over the future of funding for the arts and sciences, the authors felt the subject matter was timely.

“Without being preachy, there was a clear message embedded in the show, an exhortation to protect what’s left of the planet,” Prescott said. “Many audience members came straight from the March for Science. Having marched for science, they sat down for some art. And, on Earth Day, the gap between the two cultures of art and science seemed pretty small.”

Prescott’s perspective resonated with many in the audience. Some commented on the play’s relevance to Earth Day, while others noted that it reminded them that Yosemite is best experienced through the dual lenses of science and poetry.

According to Brokaw, with the success of this year’s production, arrangements for next year are already underway. Though the details are still being hashed out, organizers are planning to return for Earth Day weekend. Brokaw said next year’s event will feature a 90-minute production of “A Midsummer Night’s Dream” which will incorporate “several Yosemite twists.”

“We are thrilled to have brought Shakespeare to Yosemite and to have received such positive feedback from audiences,” Brokaw said. “‘Shakespeare in Yosemite’ is the merging of many great ideas: It brings together art and nature, writing and community, history and activism. It’s also an exciting new partnership between UC Merced, Yosemite and University of Warwick — one that we hope will continue for years to come.”