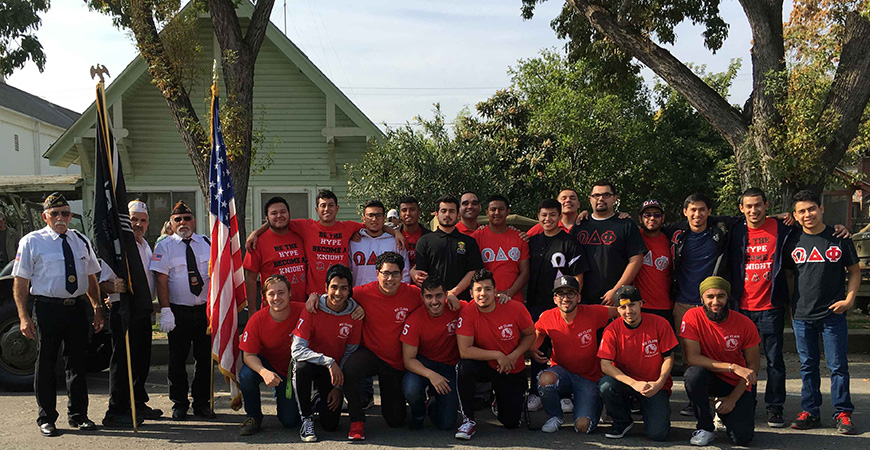 Omega Delta Phi, a service/social fraternity, has been instrumental in Gustine's Veterans Day parade and celebration for the past eight years.

Gustine’s Veterans Day parade has a been a Westside tradition for as long as most people in the area can remember. It’s also been a tradition for the brothers of Omega Delta Phi for as long as the UC Merced chapter has been chartered. Eight years might not seem like a lot in the grand history of a 50-year-old annual event, but for founding member Ivan Prado, it’s a big deal.

“I remember the first year we went out there, we just helped in the kitchen,” the 2011 alumnus recalls. “After that, we just started doing more and more.”

The event is presented by the Veterans of Foreign Wars, Joseph G. Rose Post 7635, American Legion, Manuel M. Lopes Post 240, and their respective auxiliaries. Will Martin, VFW quartermaster, says the work done by ODPhi is critical to the event’s annual success.

“They do everything from set up the float and seat folks on it, to serving food and cleaning up the place when it’s all said and done,” he said. “We appreciate them, and they appreciate us.”

Fraternity members escort veterans, wives and widows on and off the parade float.

UC Merced Cashiering Manager Carla Krogh is the fraternity’s advisor and a member of the Women’s Auxiliary. Her father was a World War II vet, and her mom was a longtime member of the auxiliary as well. She grew up helping with the Veterans Day parade and simple public meal of beans and bread.

“I’ve done it since I was a kid,” she recalls. “I worked in the kitchen alongside my dad. And after he died, my mom and I did it together for years.” Krogh took a break from the Veterans Day parade activities after her mom died, but the event came quickly to mind when ODPhi founding members were looking for community service opportunities. 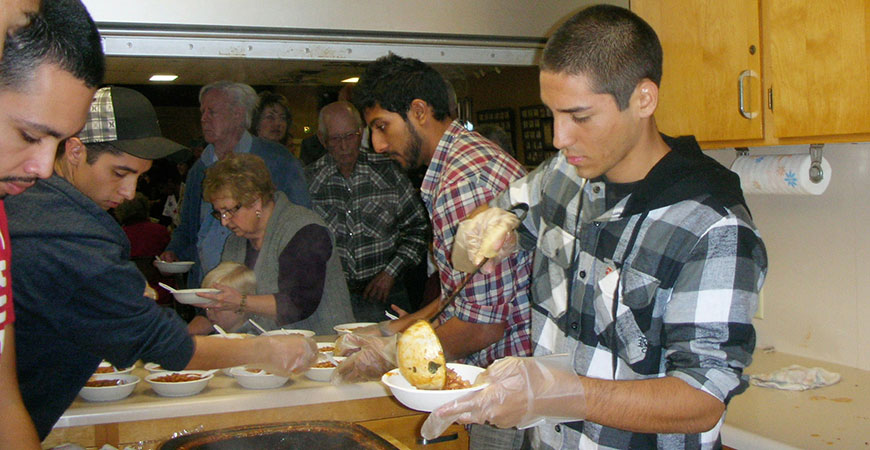 After the parade and program, Gustine ends its Veterans Day celebration with a meal of beans and bread served to the public.

Omega Delta Phi is a multicultural service/social fraternity with the primary goal of ensuring its members graduate from college while giving back to the community, President Bob Lopez said. Community service keeps the group busy. In addition to helping with the Veterans Day parade in Gustine, fraternity brothers volunteer as coaches for Special Olympics, and assist with the annual Boys and Girls Club haunted house and two holiday dances hosted by Merced County for residents with special needs.

The Veterans Day event, though, is one of his favorites. “I look forward to it every year,” Lopez said. “The veterans are always excited to see us, and it feels good to thank them for their service and to recognize what they’ve done for our country.”

The Gustine Veterans Day parade begins at 11 a.m. Saturday, Nov. 11, at the corner of Grove and Highway 33. The parade concludes at the Veterans Hall and is followed by a program. Beans, bread, coffee and punch are served afterward. Merced also has its own Veterans Day parade, which takes place at noon the same day in Bob Hart Square.