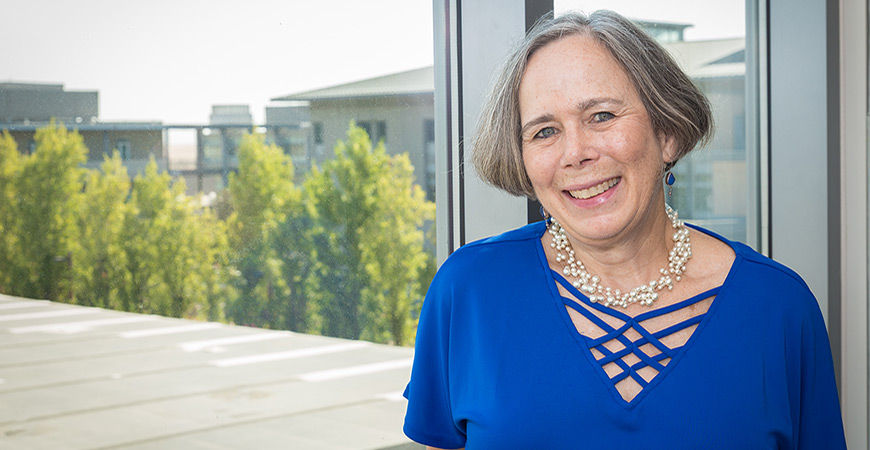 Examining the power of gender seems like a topic built for today.

But UC Merced history Professor Susan Dwyer Amussen’s new book, “Gender, Culture and Politics in England, 1560-1640: Turning the World Upside Down” examines the cultural, social and political history of England and the ways the image of an upside-down world was used to convey the “proper” roles for men and women during the reign of Queen Elizabeth I.

The book, published this summer, is part of a series on the cultures of early modern Europe, focused on the ways that representations, perceptions and negotiations shaped people’s life experiences, according to the London-based publisher, Bloomsbury.

“The book looks at unruly women and failed patriarchs and how they affected communities, families and politics during that time,” Amussen said. “For instance, having a queen was a problem. People turned somersaults trying to justify her power.”

The period was one of rapid economic and social change among a growing population. Women’s roles in certain arenas were growing in influence.

“People really did feel like the world was upside down, which is really just a way of saying ‘things aren’t going the way I think they should, and it’s upsetting,’” Amussen said.

One of the avenues Amussen takes to explore those changes is how they were presented in a range of stage plays, such as Shakespeare’s “The Taming of the Shrew” and John Webster’s “The Duchess of Malfi.” Theater — and popular culture in general — were often the means for political debates that otherwise would not have been tolerated.

“Those jokes were a big thing then. They are not funny, but they are a way that men were shamed and seen as failures because they couldn’t keep their wives faithful,” she said.

“Part of what I’m arguing is that if you want to see a society as a whole, you have to think about politics, culture and society and how changes can be tracked through those lenses,” she said.

People really did feel like the world was upside down, which is really just a way of saying ‘things aren’t going the way I think they should, and it’s upsetting.

The time period the book examines ends when the world actually did turn upside down in England as the country was torn apart by civil wars and King Charles I was beheaded outside his palace at Whitehall. That’s when the kind of language and images that had previously been popular fade away.

Though the subject falls squarely within Amussen’s expertise, the book was a labor of love in more than one way.

“It’s a complicated book because it was started by another scholar (David E. Underdown, the George Burton Adams Professor of History Emeritus at Yale University) and he wrote about 40,000 words before he passed away,” she said.

But Underdown wasn’t just another scholar. He was Amussen’s husband, and this book is the product of both of their work and the conversations they had over 30 years of marriage. It combines work they had each done in different archives, and it took her nearly seven years of serious work to reshape and refocus the book for publication.

This is Amussen’s third book. She also wrote “Caribbean Exchanges: Slavery and the Transformation of English Society, 1640-1700” and “An Ordered Society: Gender and Class in Early Modern England.”

“Gender, Culture and Politics in England, 1560-1640” is a scholarly work, but Amussen said she wrote it so it could be read by a range of audiences while addressing questions specialists would want answered. There’s a copy available in the UC Merced Library.

“I’m looking forward to hearing why my colleagues think of it,” she said.