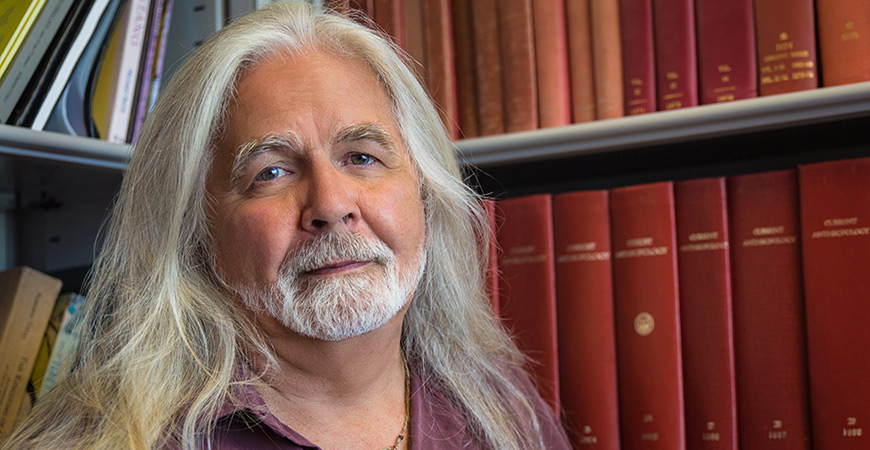 Professor Mark Aldenderfer's collaborations enable a deeper look into the past.

Archaeologists have been asking where high-elevation populations came from for decades; how they are going about answering the question, however, is new.

“Fifty years ago, I would have consulted other archaeologists,” UC Merced Professor Mark Aldenderfer said. “It used to be the one archeologist who led a dig with assistants. It was much more insulated. Now, you can’t answer interesting questions about the past without a team of scientists.”

A recent feature in Archaeology magazine highlights the team Aldenderfer has been working with in the Himalayas, including a specialist in human biology, a human geneticist interested in understanding how natural selection in humans works, and a scientist using ancient DNA to study the evolution of our species.

The incorporation of other interdisciplinary experts is a real game-changer, Aldenderfer said. Radiocarbon dating emerged in the 1950s, and scientists discovered they could extract DNA from ancient samples in the 1970s.

“With radiocarbon dating, now, you can place artifacts in time,” Aldenderfer said. “And with the study of ancient DNA, we now have ways to approach the past and ask questions that a more conventional archaeology could never have asked. These kinds of scientific advances have made it possible for us to ask questions we might never have thought about.”

To build and maintain a team like the one he works with, Aldenderfer relies on the networks he has built over the years. While a student at Penn State, he got to know other researchers who were beginning to look at human adaptations to high elevations in a methodical way. Although at that time, the work didn’t overlap with his, he knew that “you have to build your networks early and feed them.”

Once Aldenderfer’s involvement with the interdisciplinary science of high-elevation adaptation began, he contacted fellow former Penn State grad student and now one of the university’s most famous human biology alumni, Cynthia Beall. She is now a member of the National Academy of Sciences and a professor at Case-Western Reserve University in Ohio.

“She helped me understand how to think about the biological aspects of how modern peoples adapt to high elevation,” Aldenderfer said. “I got in touch with her after I was able to obtain samples of human remains from Nepal that would allow me to study this question in a new way. In the Andes, I never had remains of this kind to look at — but now, I could look more deeply at the question in a new way.”

This video by Jerry Redfern of Archaeology Magazine shows the kind of work Aldenderfer and his team conduct.

Through his discussion with Beall, he realized he needed to find other scholars to help, so he started working his network. He connected with Western Michigan University biological anthropologist and osteology expert Jacqueline Eng, a former colleague from UC Santa Barbara; Christina Warinner of the Max Planck Institute for the Science of Human History in Jena, Germany, who extracts DNA from human remains and had collaborated with others in Aldenderfer’s network; and geochronologist Michael Meyer from the University of Innsbruck, who had seen Aldenderfer’s written work and asked him to collaborate on a grant he wanted to submit on that topic.

“He was networking, too,” Aldenderfer said.

By merging two distinct strands of research, Aldenderfer and his team have found, through genome sequencing, that the people of the Himalayas came from the Tibetan Plateau, instead of from Southeast Asia, Mongolia or other regions as had been suspected.

In a different project, he and his colleagues reexamined human handprints found in a travertine deposit near ancient hot springs on the Tibetan plateau. Data analysis indicates a group of preagricultural hunter-gatherers had been settled on the plateau at least 7,400 to 13,000 years ago — thousands of years before previously thought, likely stopping in various locations throughout each year.

The team’s research suggests that the springs were wetter and had more plants and animals at the time, which would make “a big difference in terms of food availability for ancient tribes and societies, facilitating human migration during much earlier times,” Meyer said.

Though UC Merced emphasizes interdisciplinarity, finding all these different experts to form a team isn’t entirely possible at one campus, especially in the United States, Aldenderfer said. He built a team of nine core scientists and about 20 graduate students and postdoctoral scholars from American and European institutions, all of whom have contributed to the success of the research in the Himalaya.

Part of the issue is funding, Aldenderfer said.

“Europe has a different attitude toward studying the past than we do,” he said. “There just isn’t a lot of money for it here.” Research funding here is scarcer and more compartmentalized, he said.

But part of it is that incorporating other sciences into archeological studies is still a relatively new concept.

“It’s great, because we start with a vision, a question we want to answer, and we come together as a group to decide together how to solve the problem,” he said. “That’s when it’s truly interdisciplinary.”

The team is still working to finish some DNA work from cave burials in Upper Mustang in Nepal, and Aldenderfer said he and others found some unexpected burial sites and tombs this summer that need a slew of research.

He also plans to explore some caves in Nepal in the spring of 2018, and is working on locating a population from a dig in the 1990s. Those remains were moved to Germany, and he said if they can be found, “it opens up a series of new questions, but will also give us a vastly more complete picture of these high-elevation people in our study region.”

UC Meced psychology Professor Eric Walle’s research on how a child’s first steps are linked to language ability is featured in Netflix’s new docu-series, “Babies,” which explores the world of infant...

Professor Joel Spencer was a rising star in college soccer and now he is an emerging scientist in the world of biomedical engineering, capturing —...