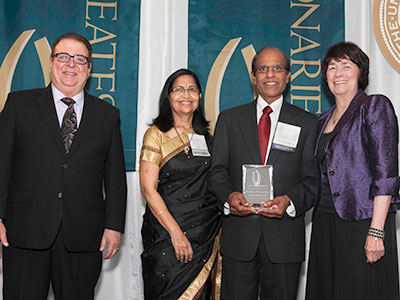 During a reception on the fourth floor of the east wing of the Leo and Dottie Kolligian Library, guests witnessed the progress taking place as part of the Merced 2020 Project.

“This young campus has thrived — not just survived — during some very difficult times, and we couldn’t have done it without your support,” Chancellor Dorothy Leland said. “I am here to celebrate with you some of the accomplishments you’ve made possible.”

Benefactors who were honored for their lifetime generosity to UC Merced included:

Leland also highlighted Giving Tuesday, a 24-hour fundraising effort that brought in more than $700,000, surpassing the $500,000 goal. Thirteen undergraduate scholarships and one graduate fellowship were supported through the initiative, now in its third year. The number of individual gifts doubled over the previous year and several donors gave multiple times.

“I am very proud of that fact that many of you in this room, despite the fact that you had stepped up in other ways, helped us with our Giving Tuesday campaign,” Leland said. “Our alums and our students also stepped up in a big way.”

She referred to the extraordinary generosity of alumni such as management and business economics major Christopher Bernal, the first student to establish an endowed scholarship to support other students, and Keith Ellis, ’12, Brandon Ruscoe, ’09, Chris Abrescy, ’09, and Daniel Lobato, ’13, who established endowed scholarships during Giving Tuesday. 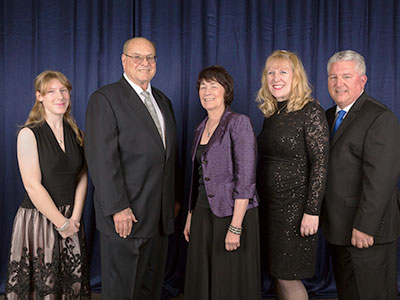 A highlight of the evening was a tribute to longtime supporter and enthusiastic friend of the campus Elizabeth Wallace, who died in October.

The Yablokoff-Wallace Dining Center, Elizabeth’s Garden and the Wallace-Dutra Amphitheater all bear the Wallace name and have played significant roles in building a sense of community.

“Elizabeth Wallace was one of UC Merced’s greatest champions,” Vice Chancellor for Development and Alumni Relations Kyle Hoffman said. “Her involvement with our campus from the very beginning has made UC Merced a greater place for all.”

At last year’s event, the campus unveiled its official alma mater, “My Merced,” written by award-winning composer Jimmy Dunne. To carry on the tradition this year, UC Merced alumna Brooklyn Edwards, ’09, performed the song for guests.