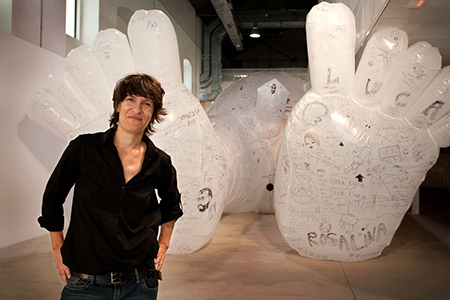 Spanish artist Olga Diego blends the concepts of art and engineering into the magic of flight.

This semester, Diego is bringing her creativity and expertise to UC Merced as the campus’s newest artist-in-residence and lecturer. Diego, known partly for her playful and often-oversized inflatable sculptures, will teach “Art in Flight” — a class combining art and engineering — and interact with the campus and community through public events, exhibitions and the creation of new artwork.

The semester will culminate with the construction and launch of a flying device — a unique performance event and collaborative art project that will involve the local and campus communities and showcase knowledge conveyed in Diego’s course. The project will be the subject of a documentary.

Jill Robbins, professor and dean of the School of Social Sciences, Humanities and Art, said Diego will help revive the artist-in-residence program and reinforce the idea that art is a critical part of everyday life.

“Art is not peripheral to research on campus — art is part of everything that we do,” Robbins said.

Diego will be the first artist-in-residence to teach a class and to stay for an entire semester at UC Merced. Diego, who arrived in Merced several weeks ago, said she is excited to teach here and to engage the community.

“Art can change the reality and possibilities that people have,” Diego said.

Her artwork often revolves around the concept of flight. She has launched cameras inside her aerial artwork and, in 2003, she flew briefly in a piece of her own construction. 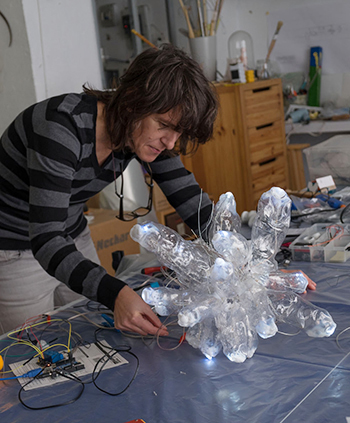 Diego, who speaks Spanish and English, taught herself the engineering principles required to create her artwork. Her pieces include giant inflatable sculptures, made of translucent plastic, that resemble the human form and can breathe, move and interact with onlookers through the use of motors and electric circuits. At one of her exhibits in Spain, spectators were invited to write and draw on “The Giant” sculpture.

She sees flight as an expression of freedom.

“You realize that you have the power to grow your own wings — to make reality your dreams,” she said. “It’s a big power.”

Art and science have only recently become separated in the public mind; indeed, Robbins noted that it was Leonardo da Vinci who invented the helicopter. Students enrolled in Diego’s class will thus cover themes such as flight techniques, performance art, inflatable sculptures, and art and society. Students are expected to create and construct their own devices that fly.

Diego said her art is inspired by life and people, and public participation is a critical element in much of her work.

“I try to express my personal feelings, but I also want to put them in a social context,” she said.

Diego’s interdisciplinary approach, along with her work and artistic commentary on issues such as homelessness and the environment, make her a good fit for UC Merced.

“The kinds of issues that are interesting to her also are themes on the campus,” said Robbins, who met Diego in Spain while working on a book several years ago.

Diego holds a bachelor’s degree in fine arts from Miguel Hernandez University in Elche, Spain, and has completed art-related training such as technology and strategy for artistic creativity and theory and practice of art performance. She has taught several art courses in Spain.

An exhibition of Diego’s work will open Feb. 10 at the Merced Multicultural Art Center; other exhibits and talks are planned, including a presentation to the University Friends Circle on Feb. 7 and a campus show on April 20.

“I’m so excited,” Diego said. “I feel good about being here and hope that I can make a good relationship with the university and community.”

After a two-month run at the Merced Multicultural Arts Center, a UC Merced professor's exhibit is now available for viewing across the globe...