Proceeds and donations from this year’s 5K will support cross country athletes through the Ryan Nunez Cross Country Memorial Scholarship, in honor of the UC Merced coach who died last year in a motorcycle accident. 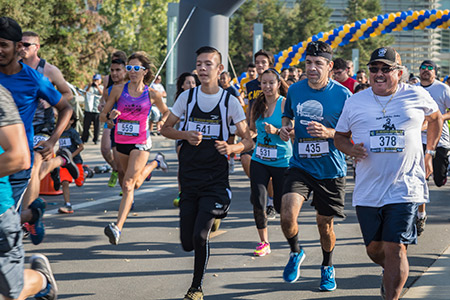 “Although it has been tremendously difficult, this run brought tears of joy to me and my family,” said Cece Nunez, Ryan’s wife.

Guillermo Rivas, a biological sciences major and member of the UC Merced men’s cross country team, took first place for the second year in a row, finishing the run in a little over 16 minutes. Cheyne Inman took second place and Anthony Tyler came in third.

“Students, alumni, faculty and staff members and friends of the campus helped us pay tribute to Ryan and support student-athletes in his honor,” Alumni Relations Director Chris Abrescy said. “We truly appreciate the continued support from our community, and especially our sponsors: Pearl Family Dentistry, Merced Main Street Association, and the United Way of Merced County.”

This year’s run included a Kids Kourse that was a hit with the under-5 runners, and a barbecue and beer garden that were a nice end to a worthwhile event.

Donations to the Ryan Nunez Cross Country Memorial Scholarship can be made online.

It is often said in sports that you have to struggle and overcome adversity before being able to bask in the glory of success. UC Merced athletics has...