By Lorena Anderson, University Communications
May 9, 2016

Editor’s note: This story originally appeared in the spring 2016 issue of UC Merced Magazine. Laura Showalter will represent the schools of Natural Sciences and Engineering as student speaker at this Sunday’s commencement ceremony. 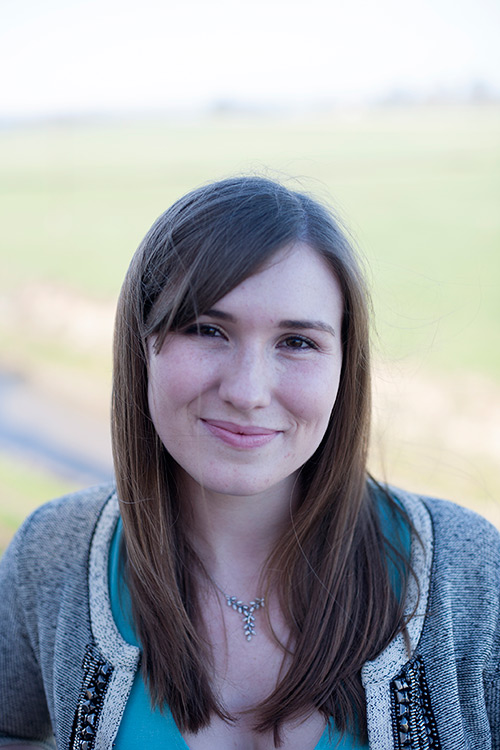 “Ambitious” isn’t a good enough word for Laura Showalter. “High-achiever” doesn’t exactly do her justice, either.

Her motto seems to be “why achieve when you can overachieve?”

Now 20, the Merced native completed third and fourth grades simultaneously, graduated early from high school and moved on to junior college at age 14 before transferring to UC Merced.

She’ll graduate this spring with a double major — chemistry and management — and nearly a 4.0 grade-point average. She works in two different research labs on campus, holds down three part-time jobs, took 20 units this spring and is studying for the MCAT exam.

While Showalter would like a gap year after graduation, she’s already formulating her game plan for graduate school.

Showalter is looking ahead to schools where she can simultaneously earn her Ph.D. and M.D. After that, she wants an MBA.

“It’s taking me many years to become an overnight success,” she joked.

“She is really driven to do whatever she sets her mind to at a very high level,” said economics Professor Alex Whalley, who runs one of the labs Showalter works in. “Her commitment to excellence is impressive.”

Whalley said that commitment was clear to him right away, and told him she was right for his lab.

“She is very detail oriented, but, at the same time, gets the big picture,” he said.

Perhaps the dedication and drive Showalter displays is in her genes. Her mother is a physician and her father a computer programmer. Both she and her brother graduated from high school early to move on to college.

“I love everything I’m doing, and I have very high standards for myself,” Showalter said. “And I have a long-term vision. I want a career that is some intersection of business, medicine and research.”

She enjoys helping others, has been a tutor for fellow chemistry students and is working as a reader for Professor Michael Colvin’s Chemical Thermodynamics and Kinetics class this spring. Being able to help people have a better quality of life is what draws her to a medical degree, she said.

She volunteered in the surgical unit at Mercy Medical Center for a year, and she has been solely responsible for billing at her mother’s medical office for the past four years. Using the medical knowledge she has gained, and with the help of the UC Merced branch of the Blum Center, she is co-founding a startup company called ScribeMerced, training other pre-health students to be medical scribes.

“We want to help the local medical community because there is a shortage of medical personnel here, but it will also help the students become more competitive for pre-health graduate programs,” Showalter said. “We hope to inspire these future doctors and health professionals to serve medically underserved areas, like Merced County, after they finish their graduate programs.”

So what’s the secret of her success?

Dedication and focus, her professors said.

“I don’t think I have ever known someone who can manage their time as well as Laura,” biology Professor Patricia LiWang said. “I was skeptical when I heard that she had a full course load, still maintained an outside job, and also wanted to work in our lab. I figured no one could make any headway in the lab that way. But she did it! Then she added research in a different lab, and although I wasn’t sure how she would do it, I knew her well enough at that point to tell her to go ahead and accept the position if she thought she could manage it.

“She continues to excel at all of it. She is a person who is driven to succeed, and also incredibly nice and easy to work with,” LiWang said.

Showalter has worked on a variety of projects in LiWang’s lab, from helping produce HIV-inhibiting proteins that could be a game-changer in Africa to her current project making an anti-inflammatory protein that could treat traumatic brain injuries.

In Whalley’s lab, she collects archival sources, interprets data and combs through historic volumes to find needed data, among other tasks.

“She has been instrumental in my work examining how innovation powers local economies,” he said.

Not that Showalter has a lot of free time, but when she isn’t working or studying, she likes to work out, read books about finance and business and she draws. She is also drawn to some extreme experiences, like skydiving, bungee jumping, flying planes and doing the SkyJump at the Stratosphere casino in Las Vegas.

What she doesn’t do much of is watch TV or play video games.

“In 20 years, I’m pretty sure I’m not going to regret missing some TV shows,” she said.

Though she originally wanted to go away to school, she stayed in Merced because her mother was ill for a time. Now, she said, she doesn’t regret staying, either.

“This is a place with a lot of opportunity,” she said. “It has really helped me grow and learn how to think. Not just take in information, but think and problem-solve.”

Now, as she prepares to graduate, Showalter can look back and offer some advice to other students.

“I see a lot of students who are afraid to talk to the professors, but UC Merced professors are really here for us,” Showalter said. “I’ve found a lot of mentors among the faculty, and being able to spend time with them and talk to them is one of the best resources the campus offers. It’s part of the experience of going to UC Merced.”

She also encourages other young people to take a page from her book and follow their passions.

“Whatever interests you, you can do it,” she said. “You can carve out your own path.”