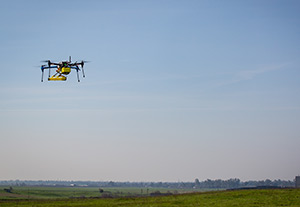 A team conducted the tests at the end of February on the Merced Vernal Pools and Grassland Reserve. During the controlled testing, researchers flew a small UAV equipped with the Open Path Laser Spectrometer (OPLS) sensor at various distances from gas sources to test the accuracy and robustness of the system.

The JPL-developed sensor enables detection of methane sources at much lower levels than previously available for the industry. The jointly conducted test furthers a methane testing and demonstration program on various platforms conducted since 2014. The ability of the OPLS sensor to detect methane in parts per billion by volume, as opposed to the parts-per-million sensors that are commercially available, could help more accurately pinpoint small methane leaks.

The advanced capabilities provided by small UAVs, especially enhanced vertical access, could extend the use of methane-inspection systems for detecting and locating methane gas sources.

Additional flight testing this year will feature a fixed-wing UAV, which can fly for longer durations and across longer distances. This is a capability necessary for monitoring natural gas transmission pipeline systems, which are often hundreds of miles long and possibly located in rural or remote areas.

Civil engineering usually brings to mind bridges and skyscrapers, but at UC Merced the engineering program extends far beyond that.   This fall,...

While the campus remained quieter than usual this summer, a group of new graduate students began their UC Merced journey earlier than the rest of their...