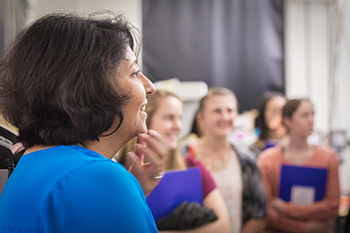 A new organization at UC Merced is working to close the gender gap by engaging, supporting and mentoring women in fields traditionally dominated by men.

WSTEM — or Women in Science, Technology, Engineering and Mathematics — brings together undergraduate and graduate students, postdoctoral researchers, professors and staff members of both genders. Formed last year, the grassroots organization sponsors monthly events such as panel discussions and workshops, and also offers mentoring opportunities to help improve the representation of women in STEM disciplines.

“We are making some headway and putting down our roots,” said physics Professor Sayantani Ghosh, who founded the group with professors Kara McCloskey, Asmeret Berhe, Suzanne Sindi and Karin Leiderman.

Other groups on campus help support women in specific fields such as engineering.  WSTEM is designed to work across all related academic areas.

The WSTEM idea grew out of conversations between Ghosh and several other female professors at UC Merced. Many of those faculty members recalled being clearly outnumbered by men while working toward their academic degrees, and also remember the challenges they faced.

In fact, a 2011 U.S. Department of Commerce study reported that women hold less than 25 percent of STEM jobs, despite filling nearly half of all jobs in the workforce. This gender gap has persisted even as more college-educated women have entered the workforce.

While the gap isn’t as pronounced at UC Merced — and some disciplines are closely balanced — organizers of WSTEM hope to promote an environment that continues to welcome and encourage women.

One goal is to encourage students to see female professors as real and approachable people who have overcome some of the same challenges they face. Sindi talked about the tendency of some students to put faculty members on a pedestal. Knocking down that idea can help women in STEM fields feel more comfortable approaching one another for guidance and support.

Already, the group’s mentoring program has more than 50 participants. Mentors can answer questions and offer advice on writing cover letters, applying for grants or finding jobs, for example.

“Part of mentoring is just being another person who cares,” Sindi said.

Danielle Edwards, a professor in life and environmental sciences, joined the UC Merced faculty in July and quickly become heavily involved in WSTEM. She is working to set up a budget and a website for the organization.

Edwards and other professors said it can be difficult to attract and especially retain female students in STEM fields. Students may not see clear career paths, especially outside of academia, or may feel intimidated choosing fields that are dominated by men.

In addition, women might struggle with life-work balance issues. Those in academia may encounter problems if they want to move to take new jobs, or have difficulty finding equivalent jobs if their partners are also in academia.

“The group provides a way for women to talk to other women about these issues,” she said.

Makenzie Provorse, a postdoctoral researcher in computational chemistry, has taken the lead in organizing some panel discussions for WSTEM. Those events help connect women across the campus and provide starting points for other conversations.

Provorse also has been teaching an undergraduate chemistry class, showing by example that women can succeed in her field. As WSTEM helps raise the profile of women in STEM academic areas, students might feel more comfortable pursuing the same paths.

“This is a great foundation for starting a community of female scientists,” Provorse said.