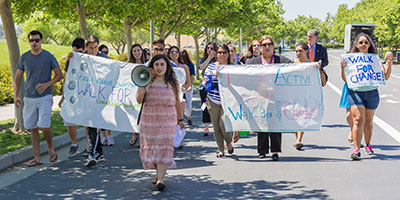 The month of education is an effort to increase awareness about sexual assault, decrease its frequency and help survivors.

CARE will host a “Here’s a Clue” workshop — in conjunction with Pride Week — from 11 a.m. to noon April 1 in the California Room to help address violence prevention for the LGBT+ communities and empower participants to confront injustices.

Students and others can participate in a clothesline project April 11 to 15 in front of the library, coloring T-shirts with personal messages relating to sexual assault and prevention. The decorated tees will be displayed throughout the week.

The campus community can speak out against sexual violence at “The 11th Hour,” a showcase featuring spoken word, music and dance performances. The event will be held from 4 to 6 p.m. April 13 outside the UC Merced Art Gallery.

The Greek Advisory Committee will show its support of SAAM by hosting Walk for Change from noon to 1 p.m. April 14. The march begins in front of the library and travels down Scholars Lane, with participants collecting change to benefit the Valley Crisis Center in Merced.

Denim Day, held from 8:30 to 10 a.m. April 27 in the Bobcat Lair, is part of an international call to help stop victim blaming event. The campaign began 16 years ago and was triggered by the Italian Supreme Court overturning a rape conviction based on the fact that the victim was wearing tight jeans — the justices argued that her rapist would have needed her help to remove the pants, which implied consent. All campus community members are encouraged to wear jeans that day to show their support.

A photo event is also planned from noon to 2 p.m. April 27 on Scholars Lane, giving the campus community an opportunity to make a pledge to support survivors and help end sexual violence.

On-campus and off-campus organizations will provide sexual violence prevention information and resources during the “Changing the Rules” themed tabling fair from 2 to 4 p.m. April 28. Participants are encouraged to pick up a passport and visit each table to win prizes.

For information on other planned events, email Taylor Fugere at tfugere@ucmerced.edu.