Alumnus Finds His Purpose in Education

When Abraham Olivares moved to Merced at age 20, a career in education was the furthest thing from his mind.

Olivares said he didn’t have a lot of confidence in his abilities back then. Life is quite different now that he is the associate principal for Student Support at Golden Valley High School in Merced. 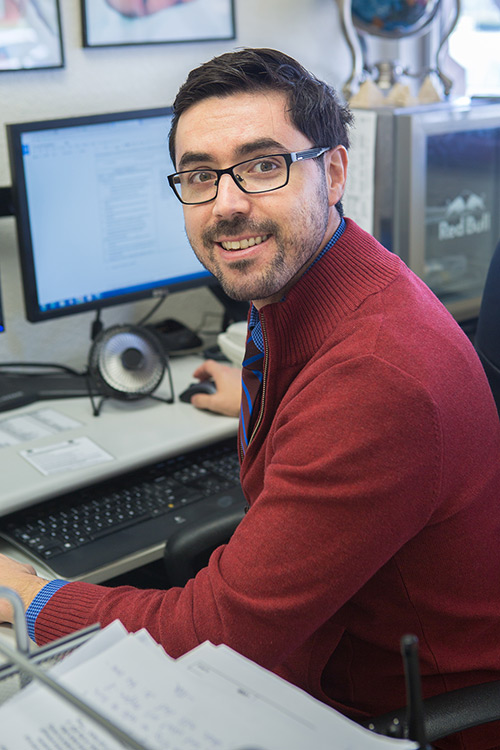 Olivares, the son of Mexican immigrants, is one of nine siblings. He had planned to go into construction like his father.

His parents had a different idea.

“My father told me my job was school, and he always reinforced the importance of getting an education,” he said.

Olivares met his wife, Kristi Imberi-Olivares, while working at In-N-Out Burger in Sacramento, his hometown. After the birth of their first son, the couple moved to Merced in 2005 to be closer to her family. Imberi-Olivares transferred from UC Davis to UC Merced to finish her undergraduate degree in social and cognitive science, and was one of the campus’s first graduates in 2006.

Olivares continued to work at In-N-Out and considered going into the company’s management program.

But conversations with his mother-in-law helped his career path emerge more clearly.

“She is the one who really pushed me into education,” Olivares said. “She is a phenomenal kindergarten teacher, and I trusted her wisdom.”

Olivares began attending Merced College and met with an advisor to create a Transfer Agreement Guarantee to attend UC Merced. He was hesitant at first, but his wife's academic experience gave him confidence in the accessibility of faculty members and the abundance of research opportunities.

Olivares recalled thinking, “You have to go; it’s right here. How can you not go?”

When he entered UC Merced in 2007, his wife was working toward her Ph.D. in Psychological Sciences.

Olivares experienced incredible opportunities working side-by-side with faculty members performing research. He co-authored a paper on political party realignment with lecturer Jon Carlson. He and other seniors undertook the task of writing “The Fairy Shrimp Chronicles,” a book on UC Merced’s history, under the guidance of founding Professor Gregg Herken. Olivares wrote a chapter about fairy shrimp, which can be found in the Merced Vernal Pools and Grassland Reserve, and helped edit other chapters.

After receiving his bachelor’s degree in history as part of UC Merced’s first full graduating class in 2009, he went on to earn his teaching credential at California State University, Stanislaus, in 2010. He obtained a master’s in educational leadership at CSU East Bay in 2015.

‘This is my Home’

Olivares moved into his administrative role as associate principal in 2015. Now he’s responsible for discipline and student support for grades 10 through 12. He is also accountable for overall safety and attendance at Golden Valley High School.

Attendance is a major undertaking for Olivares as he must ensure all students are accounted for during the school day.

His experience at UC Merced compels him to look at every challenge and task through a data mindset, which has helped him approach attendance from a different perspective and develop programs accordingly.

One program Olivares implemented rewards students who have perfect attendance for a certain time period, from a week to a semester, with incentives varying from a $5 Starbucks gift card to a $100 gift card for the Merced Mall. While the program is new and hasn’t been measured, Olivares said Golden Valley has the highest attendance percentage in the district based on the last attendance cycle.

He also identifies the students with the highest rate of chronic absences and surveys them to uncover the reasons for their absences and what might motivate them to want to be at school.

When it comes to guiding students toward college, Olivares said students often fear the rigor and the cost involved.

“If someone like me, who was totally humbled by the opportunity to go to UC Merced, can do it, then they can totally do it,” he said. “Having someone who successfully graduated from college tell them ‘It’s going to be OK; you are going to have an amazing time and experience’ really helps ease their doubts.”

Olivares said his quick advancement in the education field was because of his education at UC Merced and his leadership experience.

“Since attending UC Merced, I have been a lot more successful and do things with confidence,” Olivares said. “That’s what’s driven me to get to where I am in a relatively quick amount of time.”

Olivares is happy his path brought him to Merced, where he is raising two sons and a daughter and having a lasting effect on thousands of students’ lives.