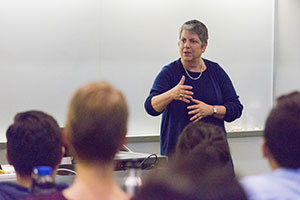 University of California President Janet Napolitano learned about UC Merced’s outreach to local high school students and efforts to support the UC system’s Global Food and Carbon Neutrality initiatives during a visit to Merced on Oct. 1.

Napolitano spent the morning at Golden Valley High School, where she and UC Merced Chancellor Dorothy Leland met with a class of juniors and seniors who challenged her with questions on topics like affordability, accessibility and availability of majors. One student asked the likelihood of placing a cap on tuition.

“It would be nice,” Napolitano said. “If we keep tuition as low as possible and the state legislature put a lot more money into the university, we’d be able to do it.”

Then Napolitano attended a rally at the school, where she encouraged about 400 attendees to dream big when it comes to education.

“Think about the University of California; it’s the greatest public university in the world,” Napolitano said. “It’s an investment in yourself and in your future.”

Napolitano urged the students not to look at the “sticker price” of a UC education, noting that more than half of UC’s undergraduate population doesn’t pay tuition. Under the UC Blue and Gold Opportunity Plan, students with family incomes below $80,000 who qualify for financial aid have tuition fully covered.

Leland gave the high school students hope for a bright future, including a university degree within their reach. She noted that like many UC Merced students, she was the first in her family to attend college, and she credited those who encouraged her for helping her get to where she is now.

“I am here today to encourage you to dream,” Leland said. “Many years ago, UC Merced was just a dream for people of the San Joaquin Valley. And high school students just like you were working hard to help start our campus.

“They dreamed that someday a University of California campus would be built close to home. Now, their dream came true, and it’s your turn to benefit from their hopes and their dreams.”

Following the rally, Napolitano made her third visit to the UC Merced campus since she took office on Sept. 30, 2013.

“My first campus visit as president of the University of California was to UC Merced, and I’m reminded every time I return how vitally important the campus is to the San Joaquin Valley, the state and the world beyond,” Napolitano said.

Her first stop on campus was a lunch to recognize the Gateway Scholars Program, a longstanding partnership between UC Merced and Merced High School that was recently energized by an anonymous grant. The program’s goal is to increase college access and degree completion by funding scholarships for Merced High graduates who attend UC Merced, and to support other efforts including the funding of a full-time career counselor at the high school.

“This program, which helps more students come to UC Merced from Merced High, is fabulous,” Napolitano said. “We really want the students in the Valley to come to UC.” 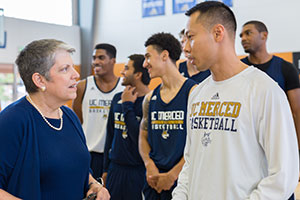 After lunch, Napolitano caught up with the UC Merced men’s basketball team and applauded them for their hard work on and off the court. On behalf of the team, coach Kevin Pham presented the president — an avid fan of the sport — with a team jersey.

Later in the day, Napolitano took time to meet with researchers to hear about progress being made related to two of her most important systemwide efforts — the Carbon Neutrality Initiative and Global Food Initiative.

In the meeting, Matlock discussed preliminary data from a recent survey on student perceptions of the Carbon Neutrality Initiative, which seeks to have all 10 UCs achieve zero carbon footprint by 2025. UC Merced is on track to achieve that goal by 2020.

When it comes to issues like climate change, Matlock said it is imperative to frame messages in the right way. She praised the UC’s systemwide Cool Campus Challenge, which launches Oct. 6, for its effort to increase engagement.

That research also ties into the Global Food Initiative, which is all about food security, sustainability and health.

During a quick stop at the Produce on the Go Mobile Farmers Market on campus, Napolitano met student Hoaithi “Thi” Dang, a Global Food Initiative fellow who has spearheaded several sustainability programs to conserve water, power and more. One such initiative is the campus’s inaugural EcoFest on Oct. 29, which will feature booths and live performances by students.

Napolitano wrapped up her visit fielding questions from UC Merced Professor Kurt Schnier’s health economics class. Junior economics major Andrew Nguyen said the president’s visit showed how much she cares about the quality of education throughout the UC system.

“I especially enjoyed her message on venturing through college and taking risks,” he said. “Every day, students should aspire to be the best versions of themselves.”

2022 was a banner year for UC Merced marked with growth, innovation and prestige. As we boldly move forward toward 2023, here's a look back...

Highlighting a Dynamic, Diverse and Accomplished Cohort of New Bobcats