Study: In Any Language, Learning to Walk and Talk Are Linked

UC Merced developmental psychologist Eric Walle recently discovered a link between walking and talking in infants. This development, however, brought up additional questions. Was the link specific to culture? Age? Native language?

Walle, a professor in the Psychological Sciences graduate group, collaborated with researchers from UC Berkeley and East China Normal University to see if what was true in the United States was also true for infants exposed to Mandarin in China. 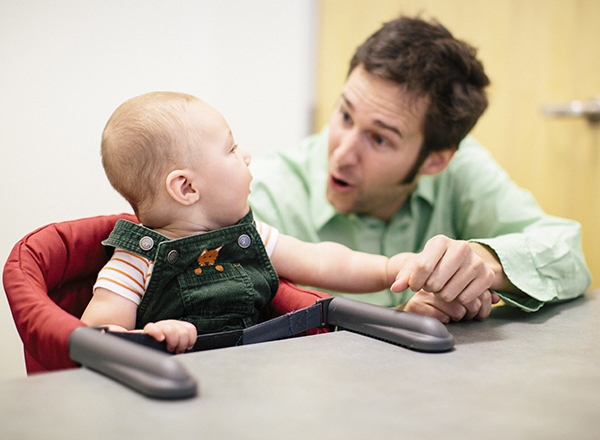 “In terms of language and culture, you can’t get more different from American English-speaking society than urban China,” Walle said. “In addition to those distinct differences, Chinese infants typically begin walking about six weeks later than American infants. It provided us with an interesting group for comparison.”

Despite the differences between infant experiences in China and the U.S., the results — published in the academic journal Infancy — were the same for both groups: Walking infants were better able to speak and understand their native language than crawling infants of the same age; the language differences between crawlers and walkers were similar; and the walking-talking relation was present in both noun and non-noun vocabularies.

“These results show us that learning to talk and understand the spoken word isn’t tied to the age of an infant, the complexity of his or her native tongue, or cultural norms associated with raising infants,” Walle said. “The acts of walking and acquiring language are not independent of each other — they are different biological processes working in concert.”

The next question Walle hopes to answer is a big one: Why?

He’s working with UC Merced cognitive scientist Anne Warlaumont right now on a study in which infant babbling is transcribed to document differences between the sounds uttered by crawlers and walkers. He and his collaborators from China are also running a series of experiments in Shanghai on different processes that could be related to walking and language, such as parent-child interactions, infant imitation and infant gaze following.

“We’re trying to hone in on the mechanism, the trigger, for the shift in language development as infants begin to walk,” Walle said. “If a child never walks, they will still learn language — they just might learn differently. Development is not a linear process.”

Hondurans cast their votes in the presidential election over the weekend, and the majority decided to elect opposition candidate Xiomara Castro to lead...