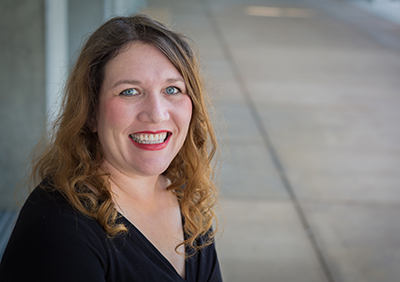 UC Merced Professor Miriam Barlow was honored with a major award last month for her role in developing a method to restore the efficacy of antibiotics and help doctors deal with resistant bacteria.

Barlow, a biologist, worked with American University mathematician Kristina Crona on the “Time Machine” software to rewind the evolution of bacteria. For that project, Barlow and Crona were chosen from among five finalists in the Health and Medicine category of the annual World Technology Network awards.

“Professor Barlow’s research will help us better understand both how antibiotic resistance happens and how we might even be able to reverse it,” said Juan Meza, dean of the School of Natural Sciences and part of the research team behind the Time Machine. “The unique approach combining biology and mathematics to help us understand antibiotic resistance attests to the power of multidisciplinary research being done at UC Merced.”

Barlow accepted the award at the World Technology Awards Gala in New York City on Nov. 20. The ceremony was part of the World Technology Summit, which brought together some of the most innovative people and organizations in science and technology from around the world to explore what is imminent, possible and important in and around emerging technologies.

This year's speakers, moderators and performers included world-renowned scientist and entrepreneur J. Craig Venter, author and United Therapeutics CEO Martine Rothblatt and award-winning composer Kenji Williams. All award finalists were inducted into the membership of the World Technology Network, which now comprises more than 1,000 members from more than 60 countries.

“Honestly, it was hard for me to believe I was even a finalist for this award,” Barlow said. “As I listened to the talks given by the other finalists, I recognized that they were among the world’s top scientists and that their work is important to the whole world in helping to ensure a positive future. Being recognized among these individuals is an incredible honor.”

Resistance to antibiotics is a natural part of the evolution of bacteria, and unavoidable given the many types of bacteria and the susceptibility of the human host. To compensate for bacterial evolution, a doctor fighting infections in an intensive care unit may reduce, rotate or discontinue different antibiotics to get them to be effective in the short term.

In the U.S. annually, more than 2 million people get infections that are resistant to antibiotics and at least 23,000 people die as a result, according to the Centers for Disease Control and Prevention.

After engineering resistant strains of bacteria in a lab, the researchers exposed them to 15 different antibiotics and measured their growth rates. From there, they computed the probability of mutations to return the bacteria to its harmless state using the Time Machine software.

The method causes bacteria to evolve in reverse and restore levels of antibiotic susceptibility similar to those found in the 1960s. The innovation has been widely welcomed because it makes available an affordable approach for treating bacterial infections in an environment where few new antimicrobials are being created.

“This shows antibiotics cycling works,” Crona said of the study. “As a medical application, physicians can take a more strategic approach.”