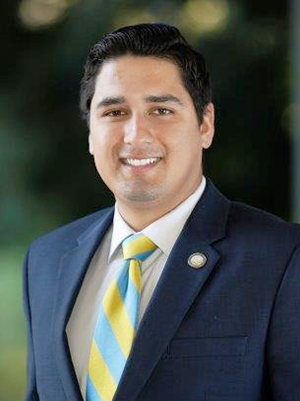 Baltazar Cornejo is poised to become a strong and tireless advocate for the Central Valley, thanks to a fellowship program that provides real-world experience in state government.

Born in Modesto to farmworker parents who had immigrated from Mexico, Cornejo received his bachelor’s degree in political science from UC Merced in 2014. He’s currently working with the office of California State Sen. Anthony Cannella, whose 12th District includes Merced and Modesto.

The 23-year-old Cornejo has the same duties as a legislative aide, meeting with interest groups, drafting communications and ultimately introducing bills to be signed by the governor. Cornejo said he wanted to stay in his community after graduation, and Cannella’s office was his top choice among nearly a dozen positions for which he applied.

“There are a lot of programs, and there’s a good chance you’ll get into one,” Cornejo said. “I applied for many.”

Claire Bunch is coordinator for outreach and special projects for the Capital Fellows Program, which is administered through the Center for California Studies at Sacramento State University. She’s seen more than 1,000 fellows come through the program in her 16 years there.

Bunch said the fellowship experience includes seminars and exposure to high-level officials. In many cases, fellows segue into jobs immediately following their fellowship.

“It’s a fun program to work for, to see the opportunities open up,” Bunch said. “I’ve seen some amazing careers launch.”

The experience has been invaluable to Cornejo, who was impressed with Cannella’s position on immigration reform. He says he’d love to stay within the district and work on issues of economic growth while emphasizing culture and art in the Central Valley.

Cornejo said he was lucky to have teachers and mentors who pushed him growing up, and he would like to be a role model for younger students. His fellowship has already made an impact on those around him — especially his family.

“Just me graduating high school was a big thing,” Cornejo said. “This is a huge thing for them.”