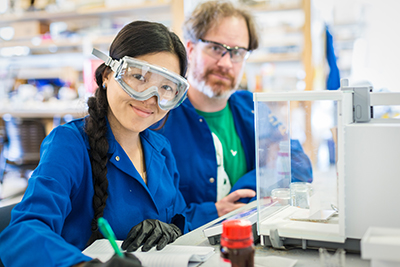 As a high school student in Merced, Ana Arteaga didn’t know which academic path she would choose in college.

But her route became clear after she spent two summers in a chemistry lab at UC Merced. In May, Arteaga graduated with a chemistry degree from UC Merced and now is headed to Oregon State University for graduate studies.

At UC Merced, local high school students work alongside professors and other researchers each summer — developing new skills, receiving specialized attention and taking part in research projects. Arteaga spent the summers of 2009 and 2010 researching solar cells in the lab of Professor Erik Menke, and she called it one of the best experiences of her life.

“I was a little bit scared before I started, but everyone was nice,” she said. “It really was a good working environment where science wasn’t scary, but something fun. And Dr. Menke was great in supporting and teaching me.”

Menke said he started with Project SEED in 2009 in the hope that he could inspire fresh interest in the chemical sciences. “There aren’t nearly enough chemistry majors,” he said.

This year, his students are working with Prussian blue dye to explore whether the material can be used in rechargeable batteries.

Project SEED has been successful in encouraging some students, like Arteaga, to pursue a chemistry degree and career. Even those who ultimately choose a different major gain valuable experience, Menke said.

“Not everyone goes on to be a chemist, but at least down the road, they have a better appreciation for working in a lab and being a scientist,” he said.

Many of the students who participate in Project SEED at UC Merced have been referred to the program by Stacey Cool, a chemistry teacher at Golden Valley High School in Merced. Cool said the program allows students to gain useful skills and confidence, and it also gives them an edge over others if they go on to apply for undergraduate research positions in college.

“It’s a good opportunity for high school students to get paid experience for doing research,” she said.

UC Merced Professor Andy LiWang is in his sixth year with Project SEED. He and his wife, Professor Patricia LiWang, co-mentor two students each summer. This year, the students are learning about polymerase chain reaction technique, which is used to amplify small amounts of DNA for use in crime labs, for example.

Andy LiWang said the program helps reveal new possibilities for disadvantaged students who might not otherwise set foot in a lab.

“When they think about the kind of career they want to have, their world can be very small,” he said. “This opens up the world to them and they get immersed in the atmosphere.”

Ph.D. Student Gets to the Root of Health Disparities Facing Hmong Farmers

Chia Thao was a teenager when she arrived in Fresno with her family to begin a new life. She was born in a refugee camp in Thailand, where her Laotian...

UC Merced’s iconic Beginnings sculpture represents arms reaching out to embrace students as they embark on a higher education journey filled with...