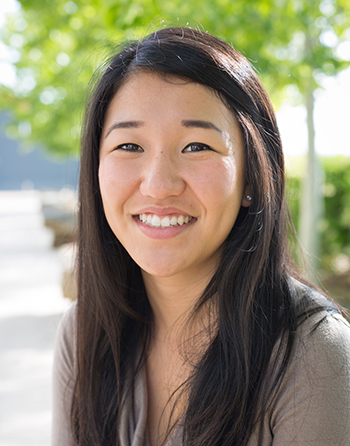 One of the things that attracted Chelsea Coe to UC Merced as an undergraduate student was the opportunity to do research. She transferred to UC Merced during her junior year and worked in Professor Teenie Matlock’s interactive cognition lab for the rest of her undergraduate career.

When she decided to make the switch from cognitive science to political science for her graduate degree, UC Merced still seemed an obvious choice to Coe.

“I had established a sense of trust with so many of the faculty here, and I knew I would be able to start my research during my first semester,” she said. “It really gave me a leg up on my graduate career, especially since I had to make up for some lost time.”

Today, Coe is researching how biological traits affect our reactions to politics and political issues — especially in terms of how those issues are framed in the media.

Along with a team of other graduate students and Professors Stephen Nicholson and Matthew Hibbing, Coe is currently working on a project that combines survey data with physiological markers of biological traits.

First, she determines a participant’s threat sensitivity by measuring their skin conductance level while they are exposed to threatening images.

Then, the subject answers a number of survey questions about political scenarios framed in different ways. For example, participants are given information about gun laws framed either to highlight the Second Amendment and the right to bear arms or as a safety issue in the context of school shootings.

The study’s initial findings indicate that people with a higher threat response when viewing the images in the experiment are more likely to be in favor of stricter gun laws than those with a low threat sensitivity when they are presented with context regarding gun violence.

Coe’s group recently presented these findings at the Physiology, Psychology and Political Attitudes conference at the University of Nebraska, Lincoln, and they have been awarded funding by the political science department to expand their subject pool and continue their experiment over the summer. Coe has also been invited to visit the College of William & Mary this summer to give a talk about the project and their methods.

In many ways, Coe embodies the interdisciplinary spirit of UC Merced. She uses her cognitive science background regularly in her political science research.

She will work with Matlock as a graduate student researcher on UC President Janet Napolitano’s Carbon Neutrality Initiative during the upcoming academic year. They will be working on communications and messaging, gauging awareness and knowledge about the initiative.

Coe is also the lab manager for the political science lab, supervising 12 undergraduate students who are getting their first taste of research, just as she did when she arrived at UC Merced.

“I’ve come full circle from when I was in their position a few years ago,” she said. “It’s great to see them get so excited about the work that we are doing.”